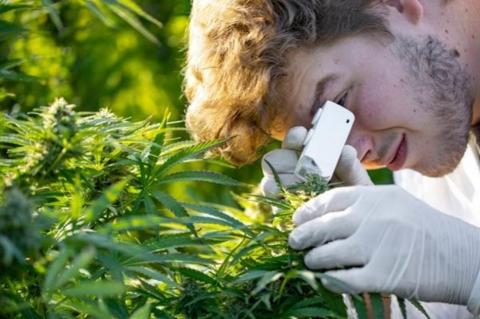 In Australia, the New South Wales Government is plowing $3 million into a $10 million medicinal cannabis industry study to be carried out at a secret location in the state.

The study is a collaborative affair involving the NSW and Australian Federal Governments, Cann Group Ltd, Aglive, Southern Cross University and the University of Newcastle.

According to a NSW Government release, the initiative will result in more than triple the number of researchers working to ensure cannabis plants contain the highest medicinal benefit for patients and will delve into all aspects of the supply chain – from cultivation to traceability.

“It is through this study that the NSW Government will build on its ongoing research into the agronomic parameters for cannabis plants while finding the ideal conditions for producing high quality, year-round, consistent medicinal cannabis products,” said NSW Minister for Agriculture Adam Marshall.

The news was announced at the unveiling of a “top-secret” cannabis research facility located in regional New South Wales, which Minister Marshall says will hopefully lead to improved access to relief for Australians suffering serious chronic and terminal conditions. Minister Marshall commented the facility’s goal is to create the “McDonald’s of the medicinal cannabis world”.

It’s the first significant news relating to the New South Wales’ Government’s medical cannabis initiatives for quite some time. The state has a Compassionate Use Scheme for adults with a terminal illness that provides guidelines for NSW Police to use discretion for possession of cannabis not lawfully prescribed if patients and their carers are registered with the Scheme.

The pace of research is picking up in Australia and the Federal Government is also eager to be seen to be supporting the country’s medical cannabis industry.

Earlier this month, the Morrison Government announced $3 million in funding to examine the benefits of medical cannabis use in cancer patients. This has been criticised by some who state plenty of research has been carried in this area and efforts (and cash) would be better directed to improving access; which remains a complex, costly and time- consuming process for doctors and patients.

Overall, 42% of Australians now support legalisation of marijuana, up 9% points in just four years. The percentage who say marijuana should remain illegal is down 7% over the same period to 49%. A further 9% are undecided.

Australians aged 18 to 34 years old are the most likely to support the legalisation of marijuana. This is also the segment of the population where opinion has shifted to the greatest degree over the last four years. In 2015 only 36% of 18 to 24 year-olds supported legalisation, now 50% do. The next age-group up, 25 to 34 year-olds, has also seen a dramatic rise in support, from 34% in 2015 to 46% now. These are the two age groups in which support for legalisation is higher than opposition to the idea.

These are the latest findings from the Roy Morgan Single Source survey, derived from in-depth face-to-face interviews with over 50,000 Australians each year in their homes.

“The ACT Legislative Assembly’s decision to legalise the possession, use and cultivation of small amounts of cannabis has brought Australia’s laws surrounding marijuana firmly back into the national spotlight,” says Roy Morgan CEO Michele Levine. "The decision certainly reflects the evolving mood of the ACT electorate: 47% of ACT residents want to see marijuana legalised – up 14% points from 2015 and a higher level of support for legalisation than in any of Australia’s six States. At 40%, those ACT residents who don’t support the legalisation of marijuana are in the minority.”

Perhaps surprisingly the two groups most opposed to the legalisation of marijuana are the youngest and oldest Australians. Only a little over a quarter of 14-17yr olds (26%) and a third of those aged 65+ (33%) support such a move.

Proponents of marijuana legalisation are young, Socially Aware and progressive

A quintessential supporter of legalising marijuana is a younger man living the single life without any children. He’s most likely to be part of the Socially Aware Roy Morgan Values Segment – ‘With a strong sense of social responsibility and a propensity for convincing others of their opinions, they often become involved in pressure groups. Common occupations include public servants, politicians and researchers.’

Those advocating for legalising marijuana are more likely than other Australians to agree with environmental concerns such as ‘At heart I’m an environmentalist’ and ‘If we don’t act now we’ll never control our environmental problems’.

They are also more likely to share progressive views such as ‘Homosexual couples should be allowed to adopt children’. In addition they are more likely to be ‘always ready to try new and different products’  and ‘more interested in their job than their house’.

Those against legalising marijuana are older and with more traditional views

A quintessential supporter of leaving marijuana illegal is an older woman who has already retired. She’s a light spender and when it comes to the Roy Morgan Values Segments likely to be a part of Traditional Family Life – ‘With a strong focus on family they spend time and energy getting the family to visit them, babysitting, weekend BBQs and buying lollies for the grandkids when their parents won’t let them have any.’

She’s more likely than the average Australian to agree that ‘Crime is a growing problem in her community’ and ‘Globalisation brings more problems than it solves’ but also more likely to give the Government the benefit of the doubt and agree that ‘The Government is doing a good job running the country’.

Attitude towards marijuana legalisation by age in 2019