Where Do Biden and Trump Stand on Cannabis Legalization? 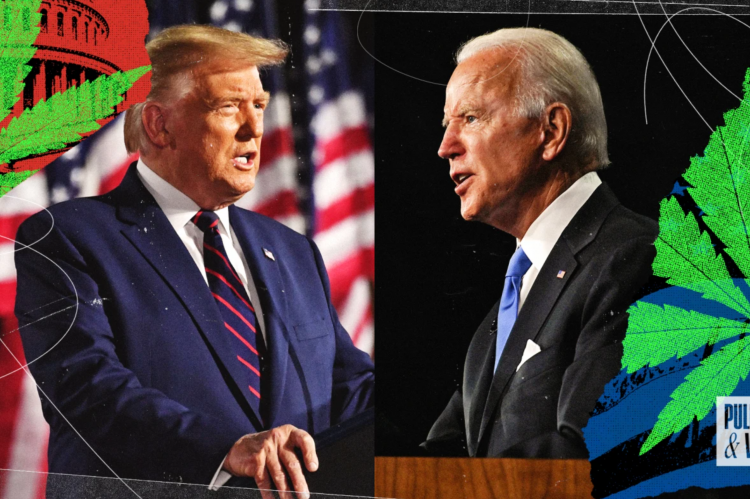 These days, it is pretty clear that Americans are finally ready to end federal cannabis prohibition. Eleven states and Washington, D.C., have already legalized the plant for recreational use, and more than half of the country lives in a state with some form of medical marijuana law on the books. In the latest national opinion polls released by both Pew and Gallup, more than two-thirds of Americans said they were ready to see cannabis legalized across the country. In Congress, a bill to fully legalize weed has more than 70 co-sponsors and could see a full House vote before the year is up.

But with the 2020 presidential election just months away, the future of marijuana legalization will likely rest on the shoulders of whoever is sitting in the Oval Office come January. So how do Donald Trump and Joe Biden feel about legalizing weed? Let’s take a look.

When Donald Trump ran for president in 2016, state-specific cannabis industry insiders and weed investors had high hopes for the candidate, who professed a love for small government and regulatory rollbacks. After the election, those lofty expectations quickly turned into pipe dreams. And while the president himself has said very little about cannabis during his time in office, Trump did not waste time taking his first steps toward continuing pot prohibition. Before he was even sworn in, Trump announced Alabama senator Jeff Sessions, a longtime outspoken anti-cannabis advocate, as his appointee for attorney general. Once in office, Sessions quickly removed protections for state-legal cannabis industries, cracking the door open for the possibility of DEA raids and other federal marijuana enforcement on weed businesses in Oregon, Washington, Colorado, and other green rush states.

In February 2017, then-White House press secretary Sean Spicer continued the new administration’s hostile attitude towards weed. Speaking to a pool of reporters, Spicer announced that he expected to see “greater enforcement” of federal cannabis laws in states with recreational pot laws on the books. In his remarks, the former Dancing With the Stars contestant said that he spoke for the president and baselessly tied marijuana use to the opioid epidemic, drawing a blurry line between medical and recreational marijuana state laws.

“The president understands the pain and suffering that many people go through who are facing, especially terminal diseases, and the comfort that some of these drugs, including medical marijuana, can bring to them,” Spicer told reporters. He said that there is a “big difference” between medical use and recreational use, which the Department of Justice would explore further.

Despite the administrative warnings and media posturing, the DEA did not raid dispensaries in Denver or Portland in 2017 or 2018. Before long, both Sessions and Spicer were ousted from the White House. In 2018, Trump told a reporter from the Washington Examiner that he supports the rights of individual states to determine their cannabis laws, but continued his ambivalence towards federal reform.

But in the year since that statement, Trump hired avowed marijuana opponents Mark Meadows and Kayleigh McEnany as chief of staff and press secretary, respectively. Additionally, Surgeon General Jerome Adams held a televised press conference decrying the supposed dangers of cannabis. As recently as February of this year, an official from Trump’s re-election campaign told a Las Vegas news anchor that the president remains vehemently opposed to federal legalization.

“I think what the president is looking at is this from a standpoint of a parent of a young person to make sure that we keep our kids away from drugs,” Marc Lotter, director of strategic communications for the Trump 2020 campaign, told Las Vegas CBS affiliate KLAS-TV. “They need to be kept illegal. That is the federal policy.”

In June, Trump’s new chief of staff laughed at a reporter’s question about the president’s stance on cannabis legalization and brushed off previous reports that Trump would support Colorado Senator Cory Gardner’s push to protect state-legal weed industries.

During his first four years in office, Trump has been brashly outspoken about everything from nuclear war to his TV personality preferences. While his relative silence on cannabis legalization was initially viewed as tacit approval from some corners of the culture, it should be abundantly clear now that Trump has no interest in either interfering in state-specific cannabis laws or finally ending federal prohibition. As with so many other segments of American life and public policy, it appears Trump would rather sit back and watch than actively engage in governing the country’s cultural shift on cannabis.

Unlike Trump, who first entered politics about five years ago, Democratic presidential nominee Joe Biden has gone on record about weed for decades. Unfortunately for legalization supporters, Biden has stood firmly against total cannabis law reform for his entire career in public service. And while he has bent his prohibitionist mindset during the current election push to support nationwide marijuana decriminalization, Biden has remained staunchly opposed to total federal legalization.

While serving as a Delaware senator in the 1970s and ’80s, Biden was a vocal cannabis detractor and advocate of policy shifts that helped create the War on Drugs, including the creation of a “Drug Czar” position in the White House cabinet. In 1982, Biden criticized the Reagan administration for being too weak on narcotics enforcement.

“Their commitment is minuscule in terms of dollars,” Biden said.

As cannabis legalization started to take hold and Biden’s political star rose in the 2000s, the senator’s opinions on pot did not waver. During his 2008 presidential campaign, Biden said that he would not use federal forces to interdict in state-legal medical marijuana businesses, but in the same breath rejected the idea that cannabis was a reasonable medication for chronic pain.

In the 13 years since Biden made that assertion, medical cannabis has remained illegal at the federal level, but rampant prescriptions for opioid painkillers have sparked the worst drug crisis in American history.

While Biden served as Barack Obama’s vice president from 2009 to 2017, his harsh views on pot began to drift further away from the American public’s growing acceptance of legal weed. In 2010, Biden regurgitated the long-debunked “Gateway Theory” that claims cannabis use leads to hard drug addiction. In 2014, Biden told a reporter from Time, “Our policy for our administration is still not legalization, and that is [and] continues to be our policy.

This year, with his place on top of the 2020 Democratic ticket secured, Biden has eased his prohibitionist mindset at least partially. Biden’s official policy outlines calls for nationwide cannabis decriminalization and rescheduling, which would turn all minor marijuana offenses across the country into ticketable offenses instead of criminal charges. Biden also supports a plan to allocate federal funds to help states expunge existing minor cannabis crimes from people’s records. Even in the face of those seemingly progressive policy points—which are certainly more 420-friendly than Trump’s stance (or lack thereof)—Biden and his surrogates have continuously reiterated his opposition to full-scale legalization.

“As science ends up with more conclusive evidence regarding the impact of marijuana, I think he would look at that data. But he’s being asked to make a decision right now. This is where the science guides him,” Stef Feldman, Biden’s policy director, told The Atlantic in July. “When he looked to put down his position on marijuana in writing for the purposes of the campaign, he asked for an update on where science was today. He didn’t ask for an update on what views and science said 20 years ago. He wanted to know what was the best information we know now. And that is what he made his decision on.”

Whether Biden realizes it or not, a focus on longitudinal scientific studies has been a long-bemoaned catch-22 in the world of weed, with most research initiatives either hindered or completely blocked by federal prohibition. And while Biden and his advisors have examined past data, cannabis advocacy groups like the National Organization for the Reform of Marijuana Laws (NORML) say the campaign has not reached out to hear their arguments in support of legalization.

With only a few months left until the election, Biden’s latest move brought Senator Kamala Harris on as the vice-presidential yin to his yang. Harris, a former California attorney general, recently changed her prohibitionist tune and has come around as a vocal supporter of federal cannabis legalization. Still, it is unclear if Harris will be able to push Biden further towards legalization if their ticket prevails in November