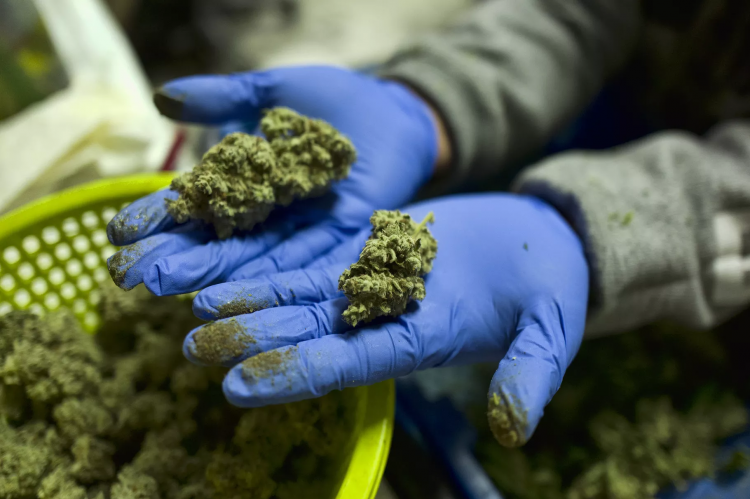 The proposed medical marijuana bill that would raise patient caps for doctors and clarify that private employers don’t need to allow marijuana use received a favorable recommendation from a Senate committee Tuesday.

“This isn’t an easy subject. It’s a difficult topic to talk about because there’s such strong feelings on both sides. And trying to find a balance has been very, very tricky,” said SB121 sponsor Senate Majority Leader Evan Vickers, R-Cedar City.

“Is this a slippery slope that we’re going down to recreational marijuana?” Christensen asked.

Vickers said he “respectfully” disagrees the bill loosens restrictions, emphasizing that he also opposes becoming a recreational use state.

Christensen said he would vote in favor of the bill because of his trust in Vickers as the committee unanimously moved SB121 to the Senate floor.

Vickers and advocates have said the changes in the proposed bill came after months of discussions — and though viewed as less urgent than those implemented during a fall special session — will help the program run more smoothly.

“We’re trying to get the bill through by March 1, completely through the Legislature by March 1, because that’s the date that we want to make sure the program’s up and running. And there are a few things in here that would help with that, as well,” Vickers said.

The bill would also eliminate the need for raw marijuana flower to be packaged in blister packs, instead requiring it to be packaged in sealed containers with a 60-day expiration date, when it becomes illegal.

“The thought there is, OK, if you have a container and you have flower in it, you don’t want somebody to just be able to go out and continue to purchase flower on the street or something and put it in that container with the idea that it’s still legal. That’s not the case. We’re just trying to provide a secure option that would still maintain the integrity of the flower but would allow it to be used,” Vickers explained.

When the meeting opened for public comment, that 60-day expiration date drew criticism from some speakers who said they believe it’s unfair to penalize people for keeping the unused plant past 60 days.

“Cannabis doesn’t expire. It simply becomes not as good as it was when it was fresh,” said James Reynolds, comparing it to a “$20 bill.”

Activist Nate Kizerian called that part of the bill “immoral.”

But Connor Boyack, president of advocacy group Libertas Institute, clarified that patients could only face trouble if they take expired containers of marijuana outside their homes.

SB121 would also change dosing “parameters” to dosing “guidelines” and allow pharmacists to provide patients directions for taking the medication, or work with doctors to do so.

Vickers said it’s been a challenge to get physicians on board in recommending cannabis as “there’s a lot of unknown about this world.”

“Some physicians are anxious to be engaged and others, and quite frankly many, are not,” he said, adding that “erroneous” news articles have created fear that doctors could face legal ramifications.

Christine Stenquist, president of Together for Responsible Use and Cannabis Education, or TRUCE, told the Deseret News in a statement Saturday that her organization is concerned that making doctors responsible for enrolling patients into the cannabis program could create legal troubles for doctors.

“That’s not true at all. But it doesn’t help when there’s a fear out there, and it just adds to an anxiety that a physician might have, or a practitioner might have, about trying to be a participant in the program,” he said.

While some called for no caps on how many patients a doctor can recommend marijuana to, Vickers said increasing the caps from 175 to 275 for general practice physicians, and 300 to 600 for approved specialists strikes a balance.

Overall, though, McOmber thanked Vickers for his work “on all sides” in drafting the bill.

SB121 would also, among other changes:

Sen. Scott Sandall, R-Tremonton, thanked Vickers and others who have worked on the bill. “This is not an easy process. Anyone who has not been in a process like this does not realize how much time, unpaid hours ... go into making this work,” he said.

Though the program might still need tweaking in the future, “this is a much better step, so thank you very much,” Sandall said.