A Tale Of Two Markets: How Illinois Succeeded In Rollout Of Adult-Use Cannabis And Why Massachusetts Failed 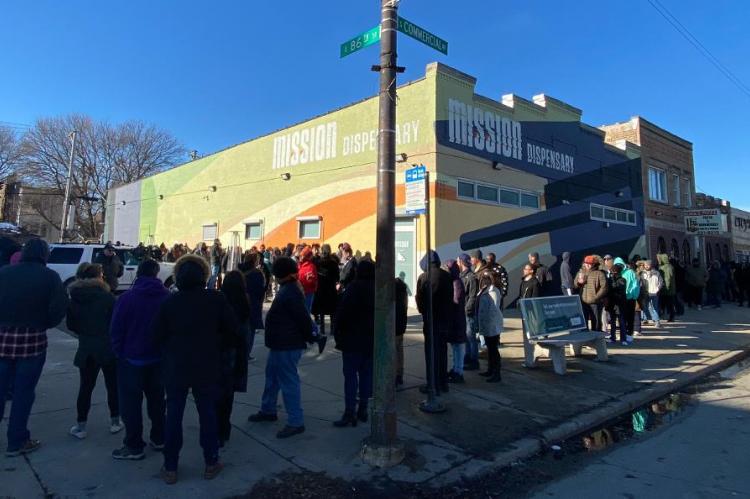 The rollout of marijuana legalization in Illinois has been well covered by the press for the first few weeks of 2020, primarily due to the long lines and sky-high sales numbers the state has seen. While the early days of legalization in Illinois has had its challenges, particularly product shortages and high tax rates, the nearly $20 million of adult-use cannabis sold by Illinois dispensaries in the first 12 days of the program should be viewed as a success.

This early triumph of legalization in Illinois stands in stark contrast to another state that has been implementing a legal cannabis market for over three years, with a very similar set of policy goals and objectives, the Commonwealth of Massachusetts. (Full disclosure: 4Front Ventures owns and operates cannabis dispensaries in both states.)

One stat exemplifies this tale of two states better than any. In Massachusetts, where legalization was passed by voter referendum in November 2016, there are currently 38 stores open to serve adult-use customers. Illinois, where the state legislature passed legalization just seven months ago in June 2019, already has 48 operational adult-use stores, with more to follow shortly. Add to this the fact that Massachusetts has no cap on the number of licenses the state can issue, while Illinois launched with only it’s limited legacy medical operators, and it’s clear something has gone seriously wrong with implementation in Massachusetts.

The reason for this discrepancy has to do with how the states chose to roll out their programs. Illinois went with the “flip the switch” model, where the state effectively grandfathers in existing medical businesses and allows them to start producing and selling for adult use. Applications for these businesses were short and administrative in nature. As long as they could show zoning compliance from their local town, they were granted adult-use licenses by the state. After all, these businesses have already proven themselves responsible operators under a highly regulated program and are the only companies that had the physical infrastructure already in place to cultivate, produce, and dispense cannabis.

On the other hand, Massachusetts chose to make all existing medical license holders go through a new, exhaustive application process, like any applicant looking to enter the market anew. Medical licensees were given priority status, meaning their applications theoretically go to the front of the line, but the cumbersome process mixed with a strong local approval component means that many medical cannabis operators have been waiting years to gain approval to open for adult-use customers.

This rush to market in Illinois has resulted in the problems mentioned above, namely long lines and product shortages. But these problems will be fixed as existing cultivators scale up their capacity and new cultivation licenses are granted and become operational. But a market can’t scale up production if it doesn’t exist, so choosing to get the program operational quickly means the state will likely be able to address these issues far faster than a state like Massachusetts, which makes obtaining a license to cultivate or dispense cannabis as challenging as opening a casino.

Perhaps Massachusetts’ most fatal mistake was mandating that all applicants receive a “Host Community Agreement” (HCA) signed by the city or town in which they plan to locate. The law purposefully made it difficult for towns to ban cannabis businesses, requiring a vote of the town’s residents in most cases. Yet the HCA requirement has served as a defacto ban, with towns simply refusing to grant them as a means to keep cannabis businesses out. When they are willing to grant HCAs, municipalities often go to the highest bidder, disadvantaging smaller and mom-and-pop startups.

Even cities that claim to want to allow a zoning and HCA process have dragged their feet for one reason or another. In Cambridge, political infighting over whether to prioritize applicants from disadvantaged communities over existing medical businesses led to a protracted legislative process that resulted in the city not adopting an ordinance until fall of 2019, and which ultimately found itself in court. In Boston, city officials have changed the process of granting HCAs three times, moving it from the city council to the mayor’s office and most recently to a yet to be appointed cannabis review board. The result? More than three years after voters approved legalization, fewer than five adult-use dispensaries service the entire Boston Metro Area, compared to more than 20 in Chicagoland.

Some may claim that part of the reason for Massachusetts’ slow roll out is to ensure industry participation for social equity licensees, people with prior convictions for cannabis offenses or predominantly people of color from communities most impacted by cannabis prohibition. Under Massachusetts law, these applicants are granted priority status and are supposed to be considered before all other applications.

Yet to date, the state has licensed very few social equity applicants, and even fewer are open and operational. Social equity applicants have found it difficult to find towns willing to grant them the HSAs needed to complete their state applications. Many applicants have complained about the glacial pace of the approval process, lamenting having to pay real estate costs for over two years in some cases without any sign of licensure. It has gotten so bad that protesters angry about the lack of social equity licensees and abnormally long licensing have interrupted the last two meetings of the Cannabis Control Commission, the regulatory agency responsible for approving licenses.

The jury is still out on whether Illinois’ aspiring social equity applicants will fare any better. But early signs are encouraging. Days before the state allowed existing medical businesses to “flip the switch” on January 1, the state accepted applications for 70 new cannabis retail stores. The state received more than 4,000 applications from over 700 applicants, with over 600 coming from qualified social equity applicants. Social equity qualification accounts for 20% of the scoring in the competitive scoring for these licenses, all but ensuring that the next round of stores will have a more diverse ownership base than any state in the country. And in March, the state will accept applications for forty new cultivation license using the same social equity criteria.

To top it off, social equity licensees in Illinois will partially be funded by proceeds received from taxes collected from the businesses that have been operational since January 1. While there’s no doubt that the existing medical operators enjoy a head start in the market, the state wisely decided that getting them up and running would allow them to collect funds to provide much needed capital to the next round of social equity licensees, who have a disproportionately difficult time attracting investment in this industry.

Simply put, Massachusetts’ best rationale for a slow roll out was to advantage social equity applicants, but instead the process has disadvantaged everyone. Meanwhile, Illinois is on pace to grant social equity licenses much faster, while already collecting tax revenues and fees to fund this important program.

Sadly, this situation was entirely predictable and avoidable. Illinois and Massachusetts were not the first states to legalize cannabis. Both had half a decade of observing legalization in action across the country. Unsurprisingly, the states that have chosen the “flip the switch” model have largely got up and running faster than those that tried to reinvent the wheel, ignore existing medical markets, or require cumbersome new application processes.

Like Illinois, the states of Colorado, Oregon and Nevada all converted existing medical businesses to adult use in around half a year after their laws’ passage. Admittedly, all suffered from initial product shortages like Illinois is currently experiencing, as previously medical businesses worked to scale up production to meet increased demand. But all currently enjoy thriving cannabis markets.

In contrast, states that have taken a similar approach to Massachusetts took far longer for their programs to get operational and reach maturity. Washington, California, Alaska, Michigan, and Maine have all experienced slow roll outs. Other than Washington, all of these states are still struggling to scale up and meet market demand.

The reality of Massachusetts’ relative failure pains me personally. I was a co-author of the ballot initiative that legalized marijuana and was deeply involved in the campaign. When we sat around the drafting table, one thing there was near universal agreement on was that the state should take the existing medical infrastructure and use it to get the program up and running as quickly as possible, ensuring access to safe and tested cannabis for all consumers and putting tax dollars in the state coffers immediately.

Yet three years after Massachusetts voters made it one of the first states (along with Maine) east of the Mississippi to legalize marijuana, the program cannot reasonably be viewed as anything other than a failure. The state’s largest population centers have few to no open stores, prices remain high, and product shortages abound. The Massachusetts market is significantly less mature than Nevada, which passed legalization on the same day. The fact that Illinois passed its law two and a half years later and already has more operational dispensaries, including nine in its largest city of Chicago, is an indictment of the red tape, bureaucracy, and municipal stonewalling that typify Massachusetts’ licensing process.

If Massachusetts is to become the cannabis capital of the Northeast, as so many of us envisioned over three years ago, it needs to learn a lesson from states like Illinois, Nevada, Oregon, and Colorado and simplify its process of cannabis licensing. Otherwise, it risks losing out to likely newcomers like New York, New Jersey, and Connecticut who may overtake it as the next regional cannabis darling, much like Illinois has quickly become in the Midwest.