One month to go until recreational weed becomes legal in Illinois. Here’s what you need to know. 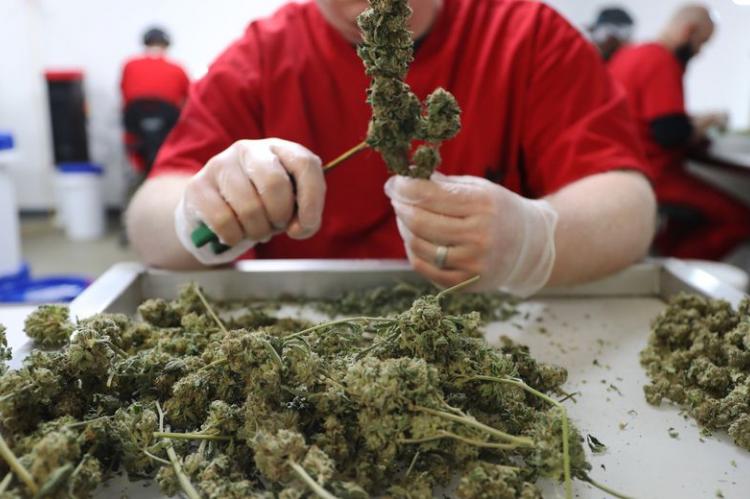 When the most popular medical marijuana dispensary in Chicago begins selling recreational pot on New Year’s Day, it will operate like a busy restaurant. Dispensary 33 plans to take names from those in line and page customers by phone when they can get in.

The North Side cannabis shop will take that unusual step due to the huge crowds expected when weed sales become legal under state law at 6 a.m. Jan. 1, 2020. The celebration will be similar to the unofficial pot holiday of April 20, or 4/20, when a Dispensary 33 street fest and special deals this year drew 800 medical marijuana customers, marketing manager Abigail Watkins said. “It’ll be like 4/20 every day,” she said.

Statewide, that pent-up demand is expected to hit like rush-hour traffic — too much for the system to handle at once. With marijuana legalization in Illinois a month away, the clock is still ticking on a host of changes that need to be made to accommodate that momentous shift. Growers have expanded, dispensaries have remodeled and lawmakers have fine-tuned the law.

Weed activists and opponents alike are wondering if the state and industry will pull everything together in time for a smooth rollout. Potentially, all 55 existing medical dispensaries would be eligible to open retail stores on their current sites as well as at second sites. But regulators have licensed only 29 stores so far — to serve an estimated 1 million pot users — so officials expect long lines and sold-out products.

The tight supply means that weed is likely to be relatively expensive, industry trackers predict. Illinois already has some of the highest-priced medical cannabis in the country, averaging around $18 a gram and $300 an ounce, according to marijuanarates.com.

Legal sales will be taxed at 10% for cannabis up to 35% THC — the component of pot that gets users high — 20% for infused products like edibles, and 25% for products exceeding 35% THC. And buyers should bring cash — as a rule, pot shops don’t take checks or credit cards.

On the production side, out of 21 existing medical cannabis warehouses, regulators have awarded just 14 recreational growing licenses so far.

While it can take three months to grow a crop, many growers say they’ve already been expanding to meet increased demand. The law requires growers to keep a one-month supply of products reserved for medical users, yet some patients say they’ve already noticed some products are no longer available.

The senior adviser to the governor on cannabis control, former state Sen. Toi Hutchinson, said she isn’t worried. She said that regulators are meeting their deadlines in implementing the program. At the same time, she predicted that as in other states that legalized weed, Illinois customers should expect some shortages when sales begin.

Do’s and don’ts of legal weed

With legalization imminent, it’s important to know exactly what the law will and won’t allow:

Adults 21 and older who are Illinois residents will be allowed to possess and use up to 30 grams of cannabis flower, 5 grams of concentrate, and 500 milligrams of THC in a cannabis-infused product like candy or brownies. Non-Illinois residents may possess up to half that much. Pot will remain illegal for those younger than 21, and it will remain illegal to drive while impaired — though there is no scientifically established measure of impairment, and no court-approved breath or saliva test.

Cannabis consumption will not be allowed in public, including parks, schools, other government buildings, around anyone younger than 21, or anywhere one can be seen by others, including in one’s own yard. Any landowner, including landlords, businesses, colleges and universities, may ban cannabis use on their premises, and employers may have a zero-tolerance policy forbidding workers from having THC in their systems.

Since cannabis remains illegal under federal law, its use is prohibited on federal land and by federal employees while on the job. That means it also generally is prohibited at federally funded facilities, such as hospitals, which get major funding from Medicare and Medicaid, public housing like the Chicago Housing Authority, and banks, which are federally licensed and insured.

Cannabis use is not allowed in a motor vehicle, boat or plane, and must be kept in a sealed container and inaccessible while driving. Local governments may not ban possession or use of pot, but many suburbs will prohibit cannabis businesses from operating in their jurisdiction.

All those restrictions mean that most people who want to use pot are supposed to do so at home. Smoking lounges will be allowed at approved dispensaries where the product is sold and at dedicated spaces such as tobacco lounges.

Cannabis may not be transported into or out of the state or by mail. And no one may undertake any task while under the influence of cannabis when that would constitute negligence, misconduct or malpractice.

More generally, a key part of the law favors minority ownership, by rewarding those disproportionately hurt by the war on drugs. The implementation of that plan remains a point of contention now that sales are imminent.

White males dominate the ownership of medical cannabis companies in Illinois and will get an exclusive first crack at the market when it opens New Year’s Day. Black aldermen in Chicago complained about that and threatened to delay openings in the city until mid-2020 when minority owners will get preference in being awarded new licenses.

Kevin Sabet, head of the anti-pot legalization group Smart Approaches to Marijuana, also criticized the lack of minority participation, calling it “a ruse" to win support for a "for-profit addiction industry.”

But Hutchinson, the acting pot czar, said the slow rollout, with a purposely constrained industry, will give social justice applicants time to get into the market before it can be monopolized.

She noted that 75 new dispensaries are to be awarded licenses in May 2020, followed by 40 new small growers, 40 infusers and transporters to be licensed July 1, 2020.

“This isn’t the home stretch,” Hutchinson said. “This is just the beginning of legalization, because we’re doing it in phases.”