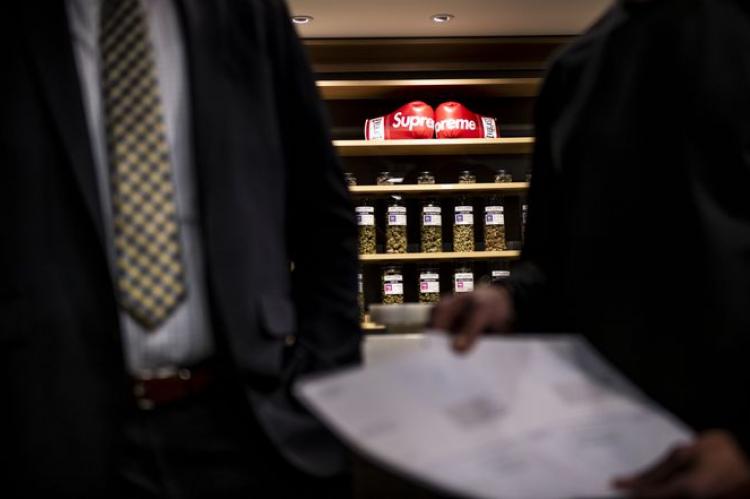 ANN ARBOR, MI -- In a couple weeks, residents 21 and up will be able to walk into a store and purchase marijuana, a plant that’s long been illegal in Michigan and that remains illegal federally.

Michigan on Tuesday, for the first time ever, sanctioned the commercial sale of marijuana beginning Dec 1.

The Marijuana Regulatory Agency issued its first recreational retail marijuana license to Exclusive Brands, 3820 Varsity Drive in Ann Arbor. It also issued Exclusive Brands a license that allows them to grow up to 1,500 plants and another that grants them the authority to process harvested marijuana into other products, such as edibles or vaping distillate.

But the harvested marijuana needs to be tested before hitting the market. The state also licensed the first testing lab, PSI Labs, a separate business located just down the road from Exclusive Brands at 3970 Varsity Dr.

A final license went to Tom Beller and his Kalkaska-based event organizing company, Real Leaf Solutions. Beller, who received his license virtually over a cell phone video call from a bed in a hospital where he recently underwent surgery, said he hopes to use the license to host or participated in marijuana-centered events, festivals and to help promote new marijuana product launches.

Hishmeh said he expects “long lines” when the doors open to the general public in a couple weeks.

“This is kind of a historic moment here in Michigan, issuing these first adult-use licenses,” Brisbo said. “I’m happy to be a part of this, I’m happy to be in Ann Arbor doing this.

" ... There’s been a lot of hard work that has gone into this .. We’re issuing the first licenses before the deadline to even start accepting applications.

“It feels great,” said Ben Rosman of PSI Labs, who received a recreational marijuana testing lab license Tuesday alongside his friend and company co-founder Lev Spivak-Birndorf. “We’ve been in the business since May of 2015, first testing under (the medical marijuana law) ... We were one of the first two licensed laboratories, so it’s really exciting to get our license now under adult-use and to be the first is just icing on the cake.”

Rosman said he expects the new industry to roll out slowly but eventually “blow up.”

“There are a bunch of communities that are playing a wait-and-see game to see what their neighboring communities are doing and how it works for them.”

Recreational sales won’t begin until Dec. 1, at the earliest, and 1,393 of 1,773 cities, townships or villages, 80% of them, have announced they don’t want marijuana shops in their community. Twenty-two communities have notified the state they plan to allow recreational marijuana industry businesses. The remaining 300-plus haven’t indicated their intentions to the state either way.

Rosman expects that to shift over time.

“Just seeing that it works well, that it’s not going to induce a lot of crime or craziness,” Rosman said. “Neighborhoods aren’t burning down, it’s just sort of business as usual but people have access to safe, quality-controlled, lab-tested, adult-use cannabis.”

Exclusive Brands already holds medical marijuana licenses that allow it to grow up to 1,500 plants, process and retail products. Exclusive Brands applied for equivalent licenses on the recreational side, but Hishmeh said there are long-term goals of expanding to 15,000-plant operation.

In addition to its self-contained business, Hishmeh said Exclusive Brands is a wholesale marijuana distributor to nearly 100 dispensaries statewide for various product brands.

The Michigan Marijuana Regulatory Agency on Nov. 13 surprised many when it announced it will allow new recreational businesses to transfer marijuana and other inventory that was grown and produced under the state’s medical marijuana system over to the recreational side.

The move has caused some backlash from marijuana business organizations who said the moved “blindsided” them and will likely caused inflated prices and shortages of some products in the medical marijuana market.

The state began accepting recreational license application on Nov. 1 and as of Nov. 14 had received 69 applications. Only companies that already possess medical licenses from the state were allowed to apply for retail and most other license types, including large grow operations, testing, transport and processing facilities. This medical license prerequisite expires Dec. 6, 2021.

State budget planners expect the state’s recreational marijuana to generate nearly $1.43 billion in sales annually beginning in late 2021 after the industry is mostly rolled out.