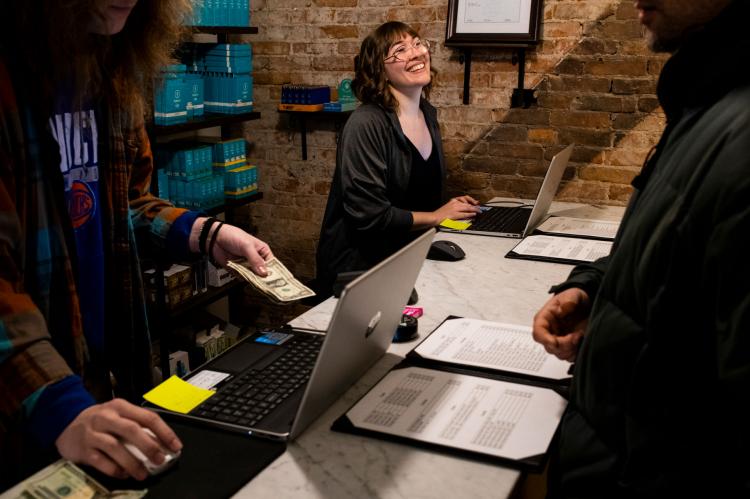 Despite a frigid, rainy morning, three Michigan cannabis stores were open for the state’s first legal adult-use sales beginning at 10:00 a.m. this morning.

All three were in Ann Arbor, a hot spot for dispensaries in the state, and also the city where the annual Hash Bash is held.

At Exclusive Brands an estimated 2,000 people waited in a line that circled around the block and into nearby parking lots, even two hours after opening.

The very first transaction was a joint preroll purchase at Arbors Wellness by two of the most well known cannabis activists in the state, John Sinclair and Ryan Basore.

Sinclair’s first legal recreational purchase came 50 years after he was arrested and sentenced to 10 years for possession of two joints, which he fought alongside residents of Michigan, culminating in the John Sinclair Freedom Rally held in Ann Arbor, 1972, headlined by John Lennon, Bob Seeger, and Stevie Wonder.

Sinclair was released early, and successfully fought various aspects of his case all the way to the US Supreme Court.

Smiling as he received the pre-rolls, Sinclair quipped: “Wonderful. But I wish I had the weed back they took from me in 1969!”

A flyer from Rick Thompson of the Michigan Cannabis Business Development Group marked the momentousness of the occasion:

“What is legal is a matter of momentary circumstance. What is right is determined by history’s moral standards. Slavery was legal, apartheid was legal, the Holocaust was legal but we refer to Biko, Mandela, Sojourner Truth, and Anne Frank as heroes for their disobedience of the immoral laws of the moment.”

“Today we hold as heroes the people whose defiance of unjust laws in Michigan made them outlaws at the time, and eventually, heroes of record.”

Most of the people we talked to in line agreed that it was a momentous occasion. Some had been there since 6:00 a.m., dressed as warmly as they could be.

“We’re making history here,” one of them told me.

When I asked, 1 out of 10 already had their medical card, but all felt like they wanted to be here today.

Out-of-staters line up too

Some even came from Indiana, telling Leafly that their state won’t be considering anything like legalization any time soon, “So we came here to get legal meds.”

The very first person in line got to to Arbors Wellness at 4:30a.m., and anxiously awaited the 10:00 a.m. opening.

Prices ranged from $15 per gram to $20 per gram, which is higher than most of the medical strains and dispensaries in the state, but it includes the 10% Michigan excise tax and the extra 6% sales tax that adult-use buyers now pay.

The adult-use products varied between the dispensaries, with one offering simply concentrates and flower, while others included edibles and topicals, as well as other products.