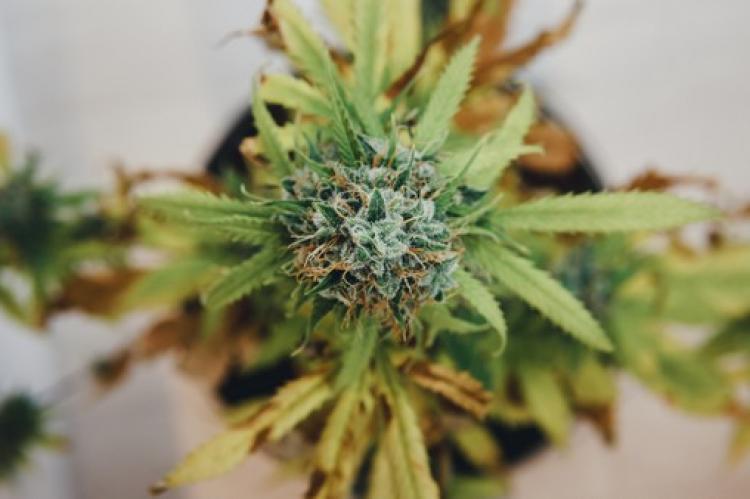 Ramon Garcia, who runs an Oakland-based cannabis distribution and delivery company called Padre Mu, grew up surrounded by cannabis. A second generation cultivator, he’s been in the volatile business for decades.

“I've been doing this in my family since I was 6, 7 years old, and only now can really talk about it,” he said, referring to the recently legalized status of his business. “As a cultivator, you have to adapt. You might have mold. You might have bugs. You might have a fire.”

Now the industry has been forced to adapt to a global pandemic. Long-standing federal rules and drained state coffers are dealing a major blow to California’s legal cannabis industry. Who will help, and how the industry will be transformed, is increasingly unclear.

When Gov. Gavin Newsom in March ordered the state to shelter in place, some dispensaries saw sales spike as customers flocked to dispensaries to stock up. Legal cannabis producers and distributors were ultimately classified as essential businesses, and Garcia said the industry scrambled to figure out how to stay open under new health and safety guidelines. But given the confusion and uncertainty of the moment, dispensaries began ordering much less product from Garcia's company, and in the last few months, he’s lost a significant amount of income just trying to keep his business open.

For cannabis entrepreneurs, recovery is not a level playing field, Garcia said. Cannabis business owners are often shut out of credit and loan opportunities because what they sell is still considered illegal under federal law.

“For people of color, for people disproportionately impacted by the War on Drugs, we don’t have rich uncles or parents we can go to get loans,” Garcia said. “We funded this out of our own pockets. And if all this fails, there is no recovery for us. All we’re asking for is an equal and fair chance to be able to come out of this.”

Cannabis operators also don’t qualify for any federal relief programs, including small business assistance. Claudia L. Mercado, the founder and CEO of cannabis micro-business Calibueno in Oakland, nearly applied for a federal loan before realizing that doing so could be a federal offense.

"I filled my application, and I was ready to submit it. But then I read the fine print that said you might go to prison,” Mercado said. “Black and Latino businesses period, small businesses, are not going to get help. Throw cannabis in the mix and we're probably last in line.”

Mercado said she once had a bank account close suddenly after she deposited tens of thousands of dollars to pay taxes, and she’s now cautious not to draw any additional attention to herself.

John Delaplane, president of the San Francisco Cannabis Retailers Alliance, said his members reported a 50% decline in sales overnight when San Francisco announced its stay-at-home order in March. And the latest numbers show his members are still experiencing a 30% decline, he added.

Cannabis entrepreneurs say federal aid would help, and industry leaders are also pushing for state policy fixes, like expanding access to banks and tax breaks. But that’s a hard sell during an economic crisis.

State taxes went up for the cannabis businesses earlier this year, and advocates say the hefty tax burden has already pushed many more consumers to the thriving black market. Meanwhile, a legislative effort to lower taxes for the industry was recently derailed for the third year in a row.

“We’re not operating in a vacuum here. We have a robust, illicit market in California,” said Erich Pearson, the CEO of SPARC, which operates dispensaries in the Bay Area and a cannabis farm in Sonoma County.

It’s estimated that California is home to the biggest legal cannabis market in the world, but the black market brought in nearly triple the sales for 2019, according to an analysis by BDSA, a cannabis market research firm.

Pearson is also worried that the coronavirus pandemic will only embolden unlicensed farmers to plant more and more. “The illicit market is going crazy right now, betting on the fact that law enforcement and government will be slow to respond given that COVID is here,” he said.

The cannabis industry has been in a virtual recession since California voters approved Proposition 64 in 2016, said Amber Senter, the CEO of Breeze Distro, an Oakland cannabis company. Taxes, she added, are too high to provide the support the industry needs to grow.

“The weed man on the corner doesn't collect taxes, it's really hard to compete with someone like that. They're not making it easy for us to thrive, let alone survive,” Senter said.

During the pandemic, Senter has been offering her delivery drivers increased pay — often known as hazard pay — because they’re risking their health for the company, all of which adds to the cost of doing business, she said.

Other cannabis business owners are still hoping for change at the federal level.

The sweeping $3 trillion dollar federal COVID-19 relief bill that recently passed the House does include a provision that would expand access to bank accounts for legal cannabis businesses. But that legislation, however, is unlikely to gain any traction in the GOP-controlled Senate.

In fact, Republican lawmakers have ridiculed the bill for, among other things, its recognition of the cannabis industry. “The word ‘cannabis’ appears in the bill 68 times. More times than the word ‘job’ and four times as many as the word ‘hire,’ ” Senate Majority Leader Mitch McConnell, R-Kentucky, recently complained.

But Rep. Barbara Lee, D-California, the co-chair of the Congressional Cannabis Caucus, said the bill’s provisions on banking would go a long way in helping the industry.

“We've got to build the political will to get this done, and I think we will," Lee said. “If you look at their districts, they will find that they're mocking their constituents and their businesses.”

Ramon Garcia, the distribution manager of Padre Mu in Oakland, says people in the cannabis community have long trained themselves to calculate the risk of failure, and to plan for the worst.

"You know, to mitigate the risks as much as possible so that if something should go wrong, it isn't devastating,” Garcia said.

But if the state and federal government don’t step in and limit damage to the industry, he added, devastating is exactly what it’ll be.