How the House Judiciary Committee decided which marijuana bill to pass 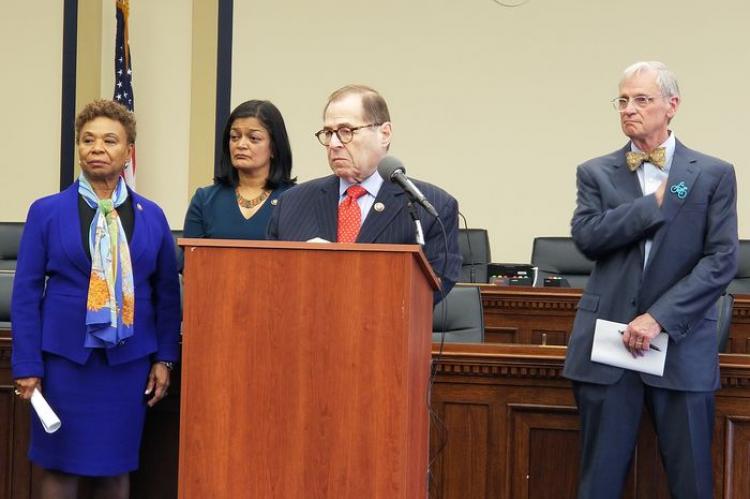 One bill had bipartisan support in both houses of Congress and a hint from President Donald Trump that he would sign it. The other has only Democratic sponsors and little chance of passing a Republican-controlled Senate.

When the House Judiciary Committee took up marijuana legislation last week, it opted for the second bill.

The measure passed the committee, 24-10, with two Republicans joining 22 Democrats in voting yes. But other Republicans said the vote on the other bill would have been overwhelmingly partisan.

The legislation that passed the committee, the Marijuana Opportunity Reinvestment and Expungement Act, or More Act, would remove the federal ban on marijuana, currently scheduled as a Class 1 controlled substance.

That would leave it to the states to decide whether to legalize the drug. It also will take steps to help communities disproportionately affected by the war on drugs and to ensure that minority-owned businesses and individuals got a share of the burgeoning legal cannabis business.

The other measure, the Strengthening the Tenth Amendment Through Entrusting States Act, or States Act, would have prevented the federal government from enforcing its marijuana laws in states with legal cannabis.

Because there was no social justice element in the States Act, some leading proponents of removing the federal ban on cannabis, including U.S. Sen. Cory Booker, D-N.J., have refused to support it.

Still, Republicans on the House Judiciary Committee said the States Act had a better chance of passing the full Senate.

“By looking for the perfect, you’re going to ruin the good and we’re going to get nothing,” said Rep. Doug Collins, R-Ga., the committee’s top Republican.

Judiciary Chairman Rep. Jerrold Nadler, D-N.Y., said that was “negotiating against ourselves.”

“In most circumstances, I don’t think it’s a good idea to say the Senate won’t take this bill, therefore we shouldn’t pass this bill,” he said.

Justin Strekal, political director of NORML, the National Organization for the Reform of Marijuana Laws, said Senate Judiciary Committee Chairman Lindsey Graham, R-S.C., could bring up the States Act without waiting for the House.

Besides, he said, the States Act still would have left the federal marijuana ban in effect for states that haven’t legalized the drug.

“Just because the enforcement wouldn’t be applied in the states that have reform doesn’t mean an individual who’s a business owner steps into a prohibition state, all of the money in their bank account is technically drug money, felonious drug money, in the eyes of the government, " he said.

“I think they should do both,” McGovern said.