Health Minister Pushes for Farmers to Grow Cannabis in Thailand 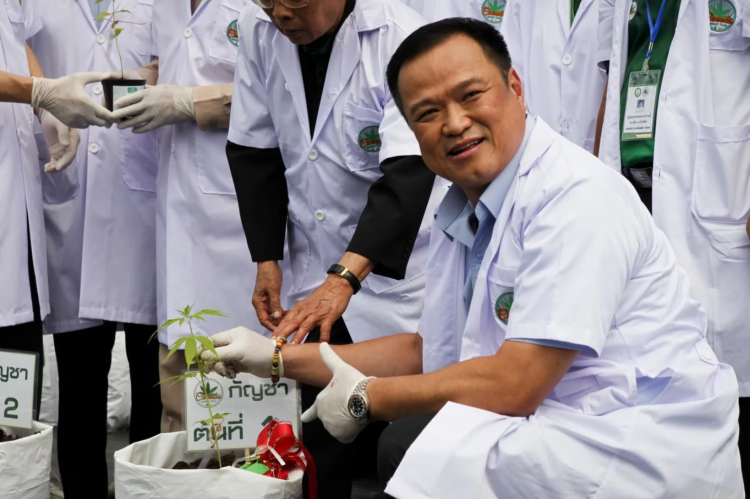 Thailand’s Public Health Minister has proposed farmers be allowed to grow cannabis plants under a joint scheme with the state.

Anutin Charnvirakul, who is also deputy prime minister, said he has signed a draft regulation on allowing farmers to grow cannabis. The regulation will be examined by the Council of State and then submitted to the cabinet for consideration.

According to Mr Anutin, it is also a revision of the original draft. Which allows growing of cannabis plants in the form of a community enterprise only.

“When it takes effect, those who want to grow cannabis can register as farmers. They can work with a state hospital in growing the cannabis plants,” he said.

He said the the Bhumjaithai Party’s campaign to allow people to grow cannabis plants at home has yet to be examined by Government House. He said the party is seeking amendments to the Narcotics Act in Thailand. Above all to allow farmers to grow a maximum of six plants.

Meanwhile, Thailand’s largest lot of 12,000 cannabis plants have been planted in Maejo University’s medical-grade greenhouse. Thought to be the first-ever industrial-scale medical cannabis manufacturing facility in the Asean region.

They were planted with the aim of producing one million bottles containing five milliliters each of cannabis oil for patients. The facility is being kept under high security because cannabis is technically still regarded as a narcotic.

A recent revision to the law, however, allows cannabis to be grown and prescribed for medical purposes. Cultivation of the crops can only be done legally by state-approved agencies.

Maejo University, the Department of Medical Service and the Government Pharmaceutical Organisation (GPO) signed a memorandum of understanding in June. Concerning the development of cannabis plantations, including local strain development for medical use, for which 12,000 seeds were donated by the department.