Drink Your Weed: How Cannabis Beverages Finally Took Off 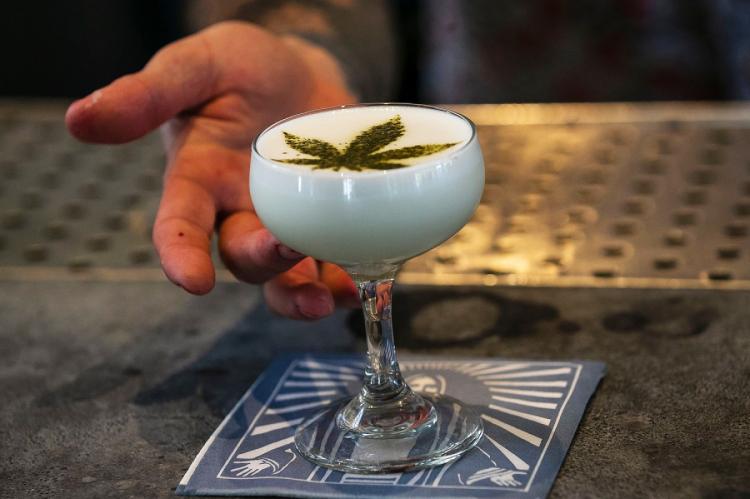 About a year ago, when Lyden Henderson took a sip of a nonalcoholic, cannabis-infused beer, he discovered something was amiss: The beverage was chunky — bits of cannabis floated throughout the beer, creating an unpleasant consistency. “It tasted kind of like I was drinking milk that had been sitting in the refrigerator for two or three months,” Henderson says. “It had the worst texture. It was one of the grossest things I had ever tried in my life.”

Just call that negative experience research. Henderson and his colleagues at Outbound Brewing, the nonalcoholic THC- and CBD-infused-beer company he co-founded in 2018, spent more than a year and a half making sure their nonalcoholic cannabis beer wasn’t chunky or lumpy. When the beverage line launched earlier this year, Henderson was sure each 12-ounce bottle maintained a smooth drink infused with 10 mg of THC or 20 mg of CBD. It felt like they’d cracked a code.

Cannabis is notoriously difficult to effectively infuse into beverages. Cannabinoids, the compounds in the cannabis plant, such as tetrahydrocannabinol (THC) and cannabidiol (CBD), are fat-soluble and not easily mixed with water. (Another liquid product, tinctures, use alcohol as a base in which to mix cannabinoids, though the consumption experience of placing an eyedropper under your tongue to dispense the solution is a far cry from sipping a drink.) For oral-ingestion purposes, edibles and baked goods have long been the standard, since cannabinoids are easily mixed with fatty butters and oils. While THC is soluble in alcohol, it is illegal to combine alcohol and cannabis in the United States — so water-based drinks prevail.

Until recently, for many cannabis-beverage manufacturers, the tricky science of getting opposites to attract resulted in imperfect drinks. Cannabis oil and water would separate, creating a wholly inconsistent product, with each sip containing a different dose of cannabis, and the taste was less than desirable. (Not to mention how just one serving would contain high amounts of THC.)

Compared with flower or vapes, the cannabis-beverage market is small — but it’s growing. According to cannabis-industry analytics firm Headset’s 2019 cannabis-beverage market report, the canna-drink market doubled over the past two years, currently worth $3 million, only about 1.4 percent of overall cannabis sales. When it comes to oral consumption, edibles still prevail as the method of choice, with 12 percent of overall cannabis sales, according to the report.

But as the legal-cannabis market matures in states like California and Colorado, consumers are looking for alternatives to smoking, vaping, and edibles, the latter of which has a delayed onset of 30 to 60 minutes and whose effects can last for more than six hours. Since there’s very little competition within the canna-drink space, companies are looking for a way in, says Cy Scott, CEO of Headset. (In Canada, where cannabis was legalized in 2018, major beverage manufacturers are looking to get skin in the game, with brewing companies Molson Coors, Anheuser-Busch InBev, and Constellation Brands investing millions of dollars in Canadian cannabis producers.)

And because beverages are seen as a functional product — one that promises to quench thirst, energize, calm, or act as a social salve — drinks are a familiar consumption method with an added bonus, says Jessica Lukas, senior vice president of commercial development at BDS Analytics, a cannabis-market insights firm. “There’s something about unwinding and relaxing with tea at the end of the night, and now my tea can be more functional because it does have CBD and THC in it as well.”

Within the past few years, technological breakthroughs afforded beverage manufacturers the means to create more-palatable drinks to appeal to a growing market. Through a process called nano-emulsification, cannabis oil is broken down into microscopic particles and then mixed with an emulsifier, a substance that helps oil dissolve in water. “In terms of the emulsifying agent, it has a part that likes oil and a part that likes water,” says Jake Bullock, co-founder of Cann, a THC- and CBD-infused sparkling water. “So it takes that cannabis oil on one end and takes the other end that likes water and suspends it in the liquid in a way that’s water-soluble. That allows the product to be really consistent.”

Each 8-fluid-ounce Cann contains 2 mg of THC and 4 mg of CBD, in flavors like lemon lavender, blood-orange cardamom, and grapefruit rosemary — beverages that taste and feel more like seltzer than a weed drink. Cann, which is headquartered in Los Angeles, worked with the Seattle-based lab SōRSE Technology on the emulsification process. First, Bullock and his Cann co-founder, Luke Anderson, developed the formula for the drink itself out of Bullock’s garage. Then they teamed up with SōRSE to tinker with the nano-emulsification process for about six months, homing in on an ideal dose and infusion that wouldn’t impact taste but would allow the cannabis to effectively solubilize in the drink. The duo hit some speed bumps before their 2019 launch — like trying the drink and not being able to find the weed. “Imagine [us] a year ago, and testing our product and seeing all the cannabis had disappeared,” Bullock says. “Where has it gone? We found it, and it was stuck to the liner of the can.” Eventually, Cann narrowed in on a product that doesn’t taste like weed, has the consistency of seltzer, and has a standard amount of cannabis throughout each can.

Since beverage-company founders tend to have less insight into the science of emulsification, many rely on outside labs to infuse their drinks. Henderson’s Outbound Brewing, the nonalcoholic cannabis-beer company, brought in an outside chemist with experience in the cannabis-beverage industry. After a monthlong brewing process involving the removal of alcohol from the beer, the chemist created the nano-emulsion and infused the beer while also introducing cannabis terpenes, which impacted flavor. “We want to work with terpenes to enhance the flavor of the beer,” Henderson says. “Because [in] a nonalcoholic beer, when you remove the alcohol you do lose some of the body. Reintroducing that using cannabis terpenes not only helped bolster the flavor of our product, but also helped guide the cannabis.” Oakland-based lab Vertosa is the infusion partner of choice for cannabis cold-brew brand Somatik, cannabis aperitif Artet, and nonalcoholic cannabis wine House of Saka. Since launching in 2018, Vertosa has worked with countless beverage companies to create unique nano-emulsions for each drink, since, for example, the chemical makeup of wine vastly differs from the chemical makeup of coffee. Usually, a beverage manufacturer will refine the drink’s formula before outsourcing the nano-emulsification process to Vertosa, CEO Ben Larson says. Within four to six weeks, Vertosa develops an emulsion that doesn’t impact flavor or color of the beverage. “We provide the active ingredient,” Larson says. “Think of us as sugar.”

One of the biggest hurdles when developing an orally ingested cannabis product is “onset time,” the length of time for a consumer to feel a drug’s effects. When cannabis is eaten, cannabinoids are absorbed in the stomach and the liver, slowing down effects. However, through nano-emulsification, cannabis is broken down into extremely small molecules, which allows for faster absorption. “Instead of being absorbed through your liver, it’s absorbed through your stomach lining,” says Tracey Mason, who, in 2018, co-founded House of Saka, the THC- and CBD-infused pink and sparkling-pink nonalcoholic wine made from Napa Valley grapes. House of Saka claims drinkers will feel effects within five to 15 minutes of consuming a 5-ounce pour, which contains 5 mg of THC and 1 mg of CBD. “You feel it right away, so you can understand what 5 mg of THC feels like,” Mason says. “And then it starts to dissipate, and then you can have another. It becomes more sessionable.”

The quicker the effects of cannabis hit, the quicker they subside, says Dr. Ryan Vandrey, an associate professor of psychiatry and behavioral sciences who studies the pharmacology of cannabis at Johns Hopkins University. However, shorter effect duration might not necessarily be a bad thing when it comes to beverages. “If you’re talking about drinking this in a social setting in an evening, you need to drive home at some point,” he says. “A faster onset and shorter duration might be better.”

But because there are currently no scientific research studies on cannabis-beverage absorption rate and onset time, Vandrey cannot say with certainty that nano-emulsification would actually cut down onset time. “We would want to see a study where they dose different people with multiple beverages and look at the blood levels of THC in those individuals after they have been given one of these doses,” he says. “Do you see the same delivery of the drug?”Due to the lack of substantial research, some beverage companies aren’t totally sold on nano-emulsions. Cannabis-infused herbal-tea brand Kikoko, founded in the Bay Area in 2014, before the adoption of nano-emulsification, struggled to zero in on a method to solubilize cannabis in tea, says co-founder Amanda Jones. After test runs with two chemists failed to produce teas with the correct dose, Kikoko brought on a chemist who worked in-house to develop emulsions for the drink. Instead of breaking down cannabis microscopically, such is the norm in nano-emulsification, the molecules remain untouched in Kikoko’s teas, which contain anywhere from 3 mg to 10 mg of THC. This can slow onset time to anywhere from 20 to 45 minutes, Jones says, since the cannabis needs to be processed by the liver, as if consumed in an edible. “The liver is there to help purify the body, help take out things it doesn’t want, so we’ve been a little bit concerned of where the nano-particles will end up,” Jones says, citing studies that suggest nano-technology may pose toxicological risks. “The science is so early, and we do everything driven by data at Kikoko.”

As with so many parts of today’s cannabis industry, beverages often contain microdoses — anywhere from 2 mg to 10 mg of THC per serving — to encourage controlled and prolonged consumption. Drinking is a social experience, from tea to beer, and lower-dose beverages are apt to be consumed over the course of an evening, rather than in a one-and-done deal. And as drinkers increasingly trade alcohol for cannabis — getting “Cali Sober” — cannabis-beverage manufacturers are hopeful they can close the gap between nursing a beer and smoking a joint.

“People know how many martinis they can drink, and we wanted to give people that same experience,” says Xander Shepherd, a co-founder of cannabis-aperitif Artet, “in that it looks and behaves like a cocktail.”

For Shepherd and his cousins, brothers Zach and Max Spohler, family time was fueled by food and drink — so that’s why they decided to co-found the company together. “Food and beverage is for socializing, and we feel cannabis has a place in that world now,” says Zach Spohler. When they first began developing Artet in 2015, creating shrubs out of a kitchen in Brooklyn before relocating to California, the trio wanted to bring cannabis into social environs beyond puff-puff-pass.

Opposed to individual cans or bottles, Artet, which debuted last year, is sold in a 750 mL bottle with 2.5 mg of THC per 50 mL pour — a little less than a shot. “I’ll pour a double drink and have a 5 mg serving, and then I would probably have another one,” Spohler says. “It can bridge the gap with someone with a higher tolerance and someone with a lower tolerance, like my girlfriend, who has one shot and doesn’t want to touch it for an hour.”

Thanks to nano-emulsion technology, next-gen weed-beverage purveyors have successfully mastered the art of sessionable cannabis sipping with drinks that combine the alcohol experience with the effects of cannabis.

“For us,” says Spohler, “we’re very firmly rooted in putting cannabis on every bar cart.”