COVID-19: How cannabis companies are helping in the crisis 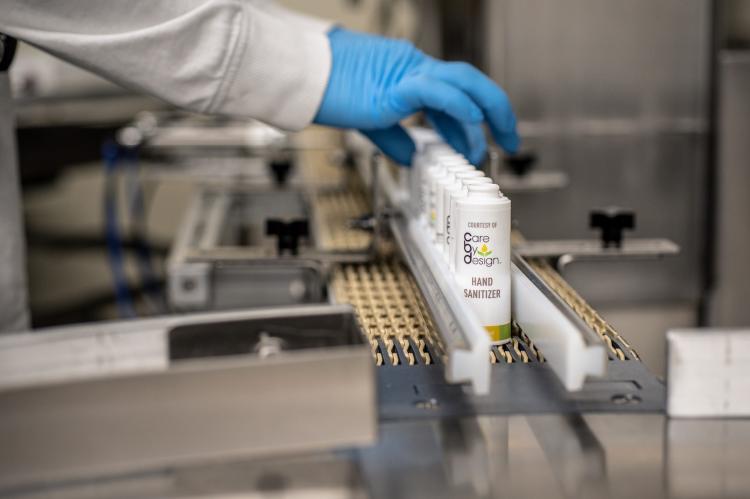 ’We just want to show everyone that if everyone does a little we can accomplish a lot.’

Healthcare workers nationwide have spent a month begging the public for more personal protective equipment—latex gloves, respirators, goggles, face shields, gowns, and disinfectants. Hundreds of thousands of lives are on the line if healthcare collapses under a wave of COVID cases.

Cannabis employs 243,700 Americans, many of them deemed “essential” and exempt from stay-at-home orders. They’re handling double the usual retail orders, and maintaining the weed supply chain, while also pitching into their communities.

In Santa Rosa, CA, about 5,000, 1-ounce tubes of hand sanitizer went out to Bay Area hospitals and police departments March 28, with another 20,000 on the way, courtesy of leading extract maker Care By Design.

Known statewide for the THC gel caps, tinctures, and vape pens, Care By Design converted a portion of their manufacturing space and production capacity to formulate and package up some COVID-killing gel. Hand sanitizer is back-ordered for weeks on Amazon.

Jim Hourigan, CEO of Care By Design’s parent company CannaCraft, said “when we started hearing reports of a shortage in hand sanitizer, we knew that we could be of assistance without negatively impacting our employees or our operations.”

Earlier this month CannaCraft called upon three staff chemists to compound ethanol and other medical-grade alcohol with 55-gallon drums of aloe vera—both of which CannaCraft had at the plant. Their on-site lab verified the compound’s strength against SARS-CoV-2, according to FDA guidance documents. CannaCraft then repurposed unused topicals packaging, industrial bottle-filling machines, and label makers to mass-produce the needed supplies.

CannaCraft had planned to release the initial 40-gallon, 5,000-tube run of hand sanitizer to cannabis stores and delivery services. But a local newspaper story drew the attention of nearby nurses and cops. On March 26, CannaCraft loaded cases of Care By Design hand sanitizer into a Santa Rosa Police Department patrol vehicle.

“It’s just really amazing to be able to be in that position to help people and the community, and be part of the solution to the things we’re dealing with,” Hunter said.

Stepping up around the nation

CannaCraft isn’t the only company stepping up. Others around the industry are doing their part, including:

“The industry is rallying,” said Hunter. “Not just to help each other, but others.”

On March 30, Jahlibyrd, based in Nevada County, CA, near Lake Tahoe, received a huge order of masks destined for the entire front line—cops, nurses, and cannabis workers included. The company had anticipated the community need for masks weeks ago, and put in an order.

“We’ve been tracking this virus for a while and believe it’s a much bigger deal than most people do,” said Sky Rutherford, Jahlibyrd’s head of construction. “We are donating to multiple different first responders. We’re in touch with three different firehouses, the sheriffs department and two to three different medical clinics, as well the CEO of Dignity Health.”

Jahlibyrd has also donated the use of a 7,000 square-foot building to their local hospital for surge capacity, and 5,000 square-feet of space to the Nevada County food bank.

“We just want to show everyone that if everyone does a little we can accomplish a lot,” said Rutherford. “Just because we sell cannabis doesn’t mean we’re just in it for the money. It’s all about the community during these times.”

As sales surge at stores, cannabis retailers’ COVID-19 philanthropy efforts are just starting to ramp up. Many retail canna-businesses have existing food bank programs that they’re supporting as millions of Americans file for unemployment and face food scarcity.

For example, the Glass House group donates 5% of product sales from its Santa Barbara adult-use store to the Santa Barbara Foodbank. Farmacy employees also get paid sick leave and team lunches each day from local restaurants.

Santa Barbara’s local cannabis farming industry group has started the 93013 Fund (for the local ZIP code), and is donating $20,000 to local causes. Their fundraising target is $200,000.