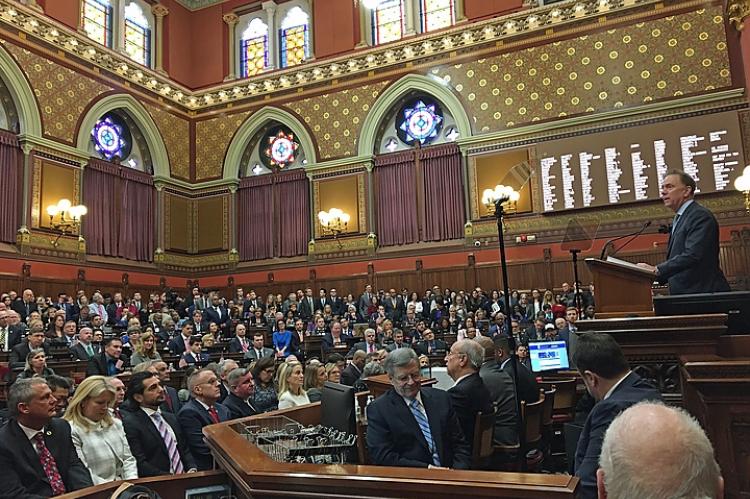 Gov. Ned Lamont made it clear in his budget address Wednesday that he believes the time has come for Connecticut to join the growing list of states to legalize recreational marijuana.

In his annual address to the General Assembly, Lamont made legalizing recreational marijuana a priority for this session even though he pushed sales off until 2022. Lamont’s budget funds positions in the state Department of Consumer Protection to prepare for legal marijuana sales, but does not include any revenue from those sales.

As to why now, Lamont said: “Like it or not, legalized marijuana is a short drive away in Massachusetts and New York is soon to follow.”

Minutes after the speech, Senate President Martin Looney said he hoped to “move on the proposal as quickly as we can.”

Connecticut residents are already driving to purchase it in other states.

“Nearby states already have it,” Looney said.

Lamont is asking for $275,362 in his budget adjustment to hire two permanent staffers and a project manager to get the regulatory framework in place for cannabis sales.

There are no plans to derive revenue from cannabis sales during the 2021 fiscal year, according to his budget released about 90 minutes before the speech.

House Speaker Joe Aresimowicz, D-Berlin, said legalization of cannabis is an issue that, if raised today and asked for a vote, would pass.

He said the fight is over what they’re going to do with the regulations and revenue sharing with the communities most impacted by the war on drugs.

Aresimowicz said he thinks the governor has taken a “conservative view,” and the legislature may want to move more quickly. If they do, he’s certain the governor will help.

Lamont added: “Right now, what you can buy legally in Massachusetts could land you in prison for up to a year in Connecticut. We just marked the 100th anniversary of prohibition. How did that work out? The patchwork of cannabis and vaping laws are impossible to enforce.”

As part of his overall legislative proposals for 2020, Lamont is introducing “An Act Concerning Adult-Use Cannabis.”

His reason for introducing it: “Prohibiting the possession and sale of cannabis has produced a thriving illicit market and staggering racial disparities in the dispensation of justice,” Lamont said. Massachusetts, Maine and Vermont already have some form of a market for adult-use recreational cannabis, and nearby states, including New York, Rhode Island and New Jersey, are on track to legalize adult-use recreational cannabis in the near future.

Lamont said the legislation was developed in careful partnership with the nearby states that have legalized.

He said it “protects public health by providing access to safe products, preventing advertising and retail locations that would appeal to children, and proactively updating the state’s indoor clean air act to protect children and other individuals from secondhand smoke.”

The proposed bill protects public safety by increasing the number of trained drug recognition experts in state and local police forces, updating traffic safety laws, reforming the administrative process that follows an impaired driving arrest, and freeing the state’s police, prosecutors and other public safety officials to focus on more significant crimes, according to documents.

It will also promote “social justice by automatically erasing most cannabis possession convictions and empaneling an Equity Commission to develop proposals for how the individuals and communities that have borne the brunt of the war on drugs can benefit from the creation of the legal cannabis market. Finally, it sets up a fair tax structure that will provide meaningful new state and municipal revenues.”

Last year three different bills to legalize, regulate, and tax cannabis passed out of committee, but none received a vote in the House or the Senate.

Proponents of recreational marijuana have repeatedly argued that polls show the majority of the public in favor of legalizing marijuana. But those arguments haven’t been successful in convincing moderate Democrat legislators and any, single Republican legislator to jump over to the legalization side.

Just last week, NORML, a group that advocates for marijuana legalization, gave Lamont a B– in its annual report card grading the country’s 50 governors for their legalization initiatives.

Lamont was credited by NORML for meeting with neighboring governors regularly on the issue.