China Says No to Marijuana but Lets Its Cannabis Industry Bloom 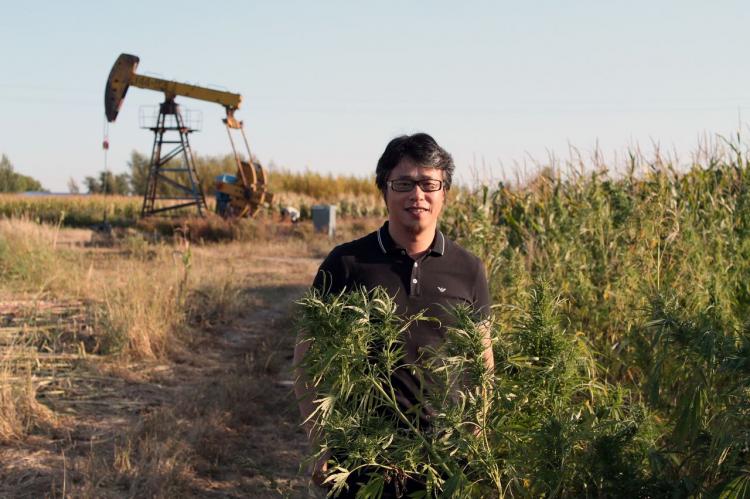 QUJING, China—In China, marijuana is seen as a dangerous narcotic, and possession is strictly punished. That hasn’t stopped the country from trying to become a powerhouse in the fast-growing industry for cannabis products.

China has grown hemp, a strain of cannabis, for thousands of years to use in clothing and traditional medicine and is one of the world’s largest hemp producers. The country is using that foothold to churn out cannabidiol, or CBD, a loosely regulated chemical related to marijuana that is finding its way into products as diverse as bath bombs and pet food.

The heart of these efforts is in Yunnan in southwestern China, the first province to make it legal to farm cannabis on an industrial scale. Here, farmers have planted vast plots of hemp that tower above their heads and stretch for miles. In the fall, those leaves and flowers are hand-harvested, sun-dried and turned into CBD powders and oils for export. “It’s an industry that can revitalize the activities of farmers,” said Yang Liu, a field manager in Qujing, a small town in Yunnan. “I’m already in love with it. And I feel like this thing will bring me a lot of benefits in the future.”

U.S. farmers also are planting more hemp to meet rising demand for CBD, which is said to provide relief from pain and anxiety without the psychoactive effects of marijuana. Brightfield Group, a cannabis research firm, expects a $23.7 billion market by 2023.

The nascent interest in CBD is unlikely to change China’s hard-line stance on marijuana. Trafficking in tetrahydrocannabinol, or THC, the psychoactive component in cannabis, can lead to a life sentence or even the death penalty. Liu Yuejin, deputy director of the National Narcotics Control Commission, said in April that as cannabis is legalized in many countries, “China will more strictly strengthen the supervision of industrial cannabis, block all loopholes and improve various management systems.”

Sales of ingestible CBD products are also strictly regulated within the country. That means almost everything China grows is sent abroad, competing for market share with other major producers such as the U.S. and Canada.

“Like a lot of things in China, there’s the fear of how much production is out there and how it could overwhelm a certain market,” said Adams Lee, an international attorney at law firm Harris Bricken, which focuses on China and cannabis cases.

According to the Hemp Business Journal, China accounted for about 11% of the $800 million global CBD market in 2018, trailing Europe and the U.S.

As the industry matures, CBD hopefuls are buying up more land and increasing production. Despite the longstanding farming of hemp, local governments only recently developed more formal regulations. “China is currently moving at light speed into the CBD industry,” said Henri Sant-Cassia, who has been touring Asia in search of new CBD ventures for the Cannabis Fund, which invests in early-stage cannabis companies.

The Chinese government maintains a tight grip throughout the process. Plants aren’t allowed to have more than 0.3% THC. Farmers must obtain licenses in one of two provinces where the industry has been legalized. CBD extraction factories are outfitted with security cameras and monitored by local police.

Paul Vincent Murray, who started Hempson BioTech in 2015 to produce CBD and other cannabis extracts in Yunnan, said that for every kilogram of oil extracted at the company’s facility, automated machines incinerate about a kilogram of THC. “There’s absolutely no way to cheat,” he said. So far, the company has produced 20 tons of oil that includes CBD.

Another CBD startup has been working with a data partner backed by Tencent Holdings Ltd. , which like China’s other tech giants collects troves of information and often works with authorities to share data.

Glenn Davies said his company, CannAcubed, had been in talks with Lingchen Security Technology Co., a wholly-owned Tencent subsidiary, to create a system tracking the amount of CBD and THC in crops, and monitoring the extraction process. That data was to be shared with public-security bureaus, he said. Tencent said Lingchen Security hadn’t reached any formal agreement with CannAcubed and hadn’t provided any product or service to it.

In the northeastern corner of China, along the Siberian border, Heilongjiang is the second province in China to legalize the farming of industrial cannabis. Jilin, a neighboring province, is also taking steps toward legalization.Outside of the Heilongjiang city of Daqing, a company called SkyGreen cultivates hemp alongside other stretches of land that house fruits and vegetables, solar panels and pump jacks. SkyGreen’s vice president, Li Ling, said government officials in Heilongjiang have encouraged the new industry as a way to diversify crops and income.

Mr. Li is reluctant to pin the future of the industry on CBD demand alone. Within China, he is trying to focus on other industrial uses such as in clothing and home goods.

“The risk for this kind of thing in the early stages is huge, because you are doing something that people have never done,” said Mr. Li, who previously worked as an architect for China’s largest oil refinery.

As more companies enter the industry, they will have a tougher time earning money, said Tan Xin, chairman and co-founder of Hanma Investment Group Co., one of China’s first cannabis enterprises.

Already CBD prices have plunged since HMI entered the space in 2013, when 1 kilogram of CBD sold for about $50,000 in the U.S. market, he said. Last year, prices averaged $6,000, a direct result of farmers growing more hemp. Mr. Tan predicts that next year they will fall below $1,000.

Nonetheless, Mr. Tan said his company can turn a profit as long as prices stay above $300, thanks to China’s advantage in cheap labor and processing costs.

“My guess is that will drive U.S. CBD producers crazy,” Mr. Tan said. “Being profitable at $300 is a very scary thing.”