“A lot of people really felt like small farmers would be taken care of and looked after." They haven't been. 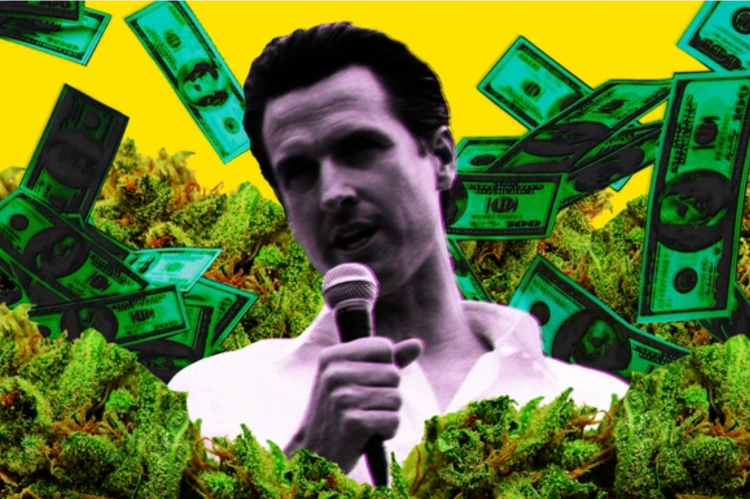 In May 2015, Gavin Newsom, then California's lieutenant governor, ventured deep into the Emerald Triangle, the state's traditional underground cannabis region and the so-called Napa Valley of Weed, to pitch veteran growers on legalization.

Until then, weed farmers in California had been making middle-class (or, in some cases, much better) livings growing under the vague and erratic protections afforded by the state's ambiguous medical-marijuana laws. Full-on legalization meant a shakeup—or a shakedown. Capitalized, corporatized Big Weed was real and wanted to "write a lot of you guys out," Newsom warned to a packed meeting about what the future might look like in the tiny town of Garberville. "We cannot let that happen." He swore allegiance to the cottage growers who managed to build both an industry and a brand despite the best efforts of law enforcement.

The Humboldt County crowd ate it up. Afterwards, Newsom stuck around and posed for photos. The next fall, 57 percent of Californians approved Proposition 64, legalizing recreational cannabis. In cannabis country—which had rejected legalization in 2010 in part over fears that, for them, a capitalized and corporatized commercial market meant economic ruin—Prop. 64 enjoyed a clean sweep.

An estimated $3.1 billion worth of cannabis will be sold at California's legal pot stores in 2019. But legalization is strangling the livelihoods of the small farmers Newsom promised would be protected, according to official licensing data and conversations with a slew of industry insiders and experts. Commercial, legal cannabis has been increasingly dominated by large-scale competition from massive growers. And instead of receiving a head start or help, the little guys got hammered by restrictive zoning, costly permitting, and other regulatory hurdles restricting their access to legal market.

In other words, from a cottage farmer’s perspective, all the ills of legalization foretold by Newsom have come to pass.

If cannabis legalization is often advertised as a social-justice project, a technique to right the wrongs of the quantifiably racist drug war, legalization is creating losers on the basis of class as well as race. Legal cannabis has been lily-white and almost exclusively male from the beginning, a fact acknowledged first by self-conscious jokes at cannabis business conferences, and later by state and local "equity" programs meant to guarantee entrepreneurship opportunities to people of color. These largely seem to be failing: In Massachusetts, only two of 184 statewide weed licenses are held by equity program applicants, and in Illinois, where legal sales begin on January 1, black investors and entrepreneurs have complained cannabis is shaping up as a legal monopoly. Meanwhile, in Chicago, residents of public housing are discovering cannabis can and will still be used against them by authorities even now that weed is legal.

But the example of California’s cottage growers shows that anyone already involved in weed pre-legalization is vulnerable to a rip-and-run executed by the political class.

"We were so star-struck—'Gavin Newsom is coming to Garberville!'" remembered Casey O'Neill, a multi-generational cannabis farmer and the public face of Mendocino-based HappyDay Farms, who in the years since has adopted a de-facto role of readily available spokesperson for small weed farmers. "He got up there, was very suave, and said, 'We’re not going to leave you behind.' And you know what happened? The result is, a lot of people got left behind."

A stated goal of Newsom-endorsed Prop. 64 was to give modest farmers a lengthy head start. Large-scale growers were going to be barred from entering the game for five years, time enough for the cottage industry to get legal and get established. Instead, the cultivation regulations that emerged more than a year after the 2016 vote included a very convenient loopholethat allowed enormous factory-sized farms to go into business almost immediately.

Before legalization, there were as many as 10,000 cannabis growers in Mendocino County, where O’Neill's farm is located. As of January, the state had issued only 691 cultivation licenses. Thanks to Prop 64, everyone else—who couldn't afford permitting or consulting fees; who couldn't afford mandated improvements to roads, outbuildings, or water situations; whose county-level zoning laws didn’t allow them to get a permit—is now an outlaw. Those who have come into the light have been rewarded with a tax structure that charges a levy on pot they haven't even sold yet while still being unable to access banks and file normal taxes because of federal drug-control statutes.

Legalization "is just killing off the small farmer," said Mendocino County supervisor Ted Williams, who was elected last year. "The sense in this county is that Prop. 64's implementation is really favoring the corporate interests at the cost of the small family farms."

Newsom does, of course, have an out: much of this damage was done by people he did not hire, before he became governor. But 11 months into his first term, he hasn't done much to help, either, critics say.

In his first year, he's taken a "somewhat cautious approach," as Jeannette Zanipatin, the state director for the advocacy group Drug Policy Alliance, told the Los Angeles Times. That's generous: One of the governor's first acts related to cannabis after his swearing-in was to step up enforcement: if legalization would create more outlaws, legalization would also require more National Guardsmen flying helicopters.

Newsom—who made his fortune in the hospitality business, running restaurants and wine stores—has also banned cannabis use in tour buses, delivering a blow to the nascent "canna-tourism" trade. And, as per industry demands, he and state lawmakers significantly jacked up fines on anyone dealing with weed without a license.

Newsom's office did not make the governor available for an interview on his past promises and current policies. Speaking to VICE in his place, Nicole Elliott, Newsom's senior advisor on weed, acknowledged some failings while calling legalization "an ongoing effort."

"Put most simply, I don't think all of the objectives of Prop. 64 have been met yet," she said, adding that figuring out how that would be done is, likewise, ongoing. "I think if we knew the full answer to that, we wouldn't have such a high percentage of unlicensed operators." But, she noted, closing loopholes like the one allowing massive farms right away and fixing taxes aren't Newsom's job; they're the Legislature's. And so far, lawmakers have shown limited appetite for rescuing the state's small weed growers.

That may be true. But Newsom hasn't used his bully pulpit to demand lawmakers correct this, leaving small growers canvassed by VICE feeling alternately betrayed and dejected. His focus instead has used a policing lens. "We have to hold accountable those who aren't participating in the legal market," he said in February.

Regulated cannabis farming is "a very, very high bar," to clear, O'Neill retorted. "And if you can't jump that high? 'Send in the National Guard!'? To see the first step [from Newsom] was, 'We need more enforcement,' was deeply and profoundly frustrating."

Not every cannabis farmer pins the blame for their struggle on the governor, who is not responsible for capitalism nor the war on drugs. And among the cannabis farmers and retailers interviewed for this story, Elliott actually received high marks. "She gives a shit. She really cares," said one San Francisco-based dispensary owner who requested anonymity to speak freely without drawing negative attention.

The problem is "the state," and that's bigger than any one person, no matter how much power they wield, setting communities up for disappointment nationwide as legalization continues.

"I'm not sure the governor has a lot to do with it," said Swami Chaitanya, cofounder and avatar of Swami Select, a successful Northern California brand he co-founded and operates with Nikki Lastreto. "All those agencies have their own agendas and their own people. How much can the governor actually do?"

"But," allowed Swami, "he can do more." If, for example, state agencies are making life miserable for small weed growers, their directors—who serve at the pleasure of the governor—can theoretically be made to shift strategy or be replaced.

Or maybe preserving the old way was an unrealistic promise nobody could keep. "The political naiveté of many in the cannabis space is reflected in their unrealistic expectations of what the political process can do," said Matt Kumin, a San Francisco-based attorney specializing in cannabis. "I know some people say that [Newsom's office favors big weed]... but he isn't doing so terrible" in comparison to other governors who have cracked down on THC products amid the vaping panic. "In that sense, Newsom is one of the better governors when it comes to cannabis policy in the United States,” Kumin added. “But the small guys just got hammered.”

As for Garberville itself, were Newsom to return there or visit another town along US-101, the highway connecting pot country to San Francisco and markets south, California's governor might not recognize it. With the collapse of the small-farmer economy is coming the collapse of everything else. Flow Kana, a well-capitalized startup that distributes sun-grown cannabis to urban markets, recently moved to cut up to 20 percent of its workforce. A weed speculation-fueled real-estate boom is over. Retail spaces are empty and restaurants are quiet. Since his visit, "the town looks totally different," said Leo Stone, an Iraq War veteran and cannabis farmer whose company, Aficionado Seeds, routinely won top awards at the annual Emerald Cup before legalization.

"A lot of people really felt like small farmers would be taken care of and looked after," he added.

But instead of a thriving rural economy, legalization may be creating a weed Rust Belt, with neighbors retreating back up the mountain into the realm of scary dudes with guns and rampant abuse. And "that," Stone said, "is the most heartbreaking thing."