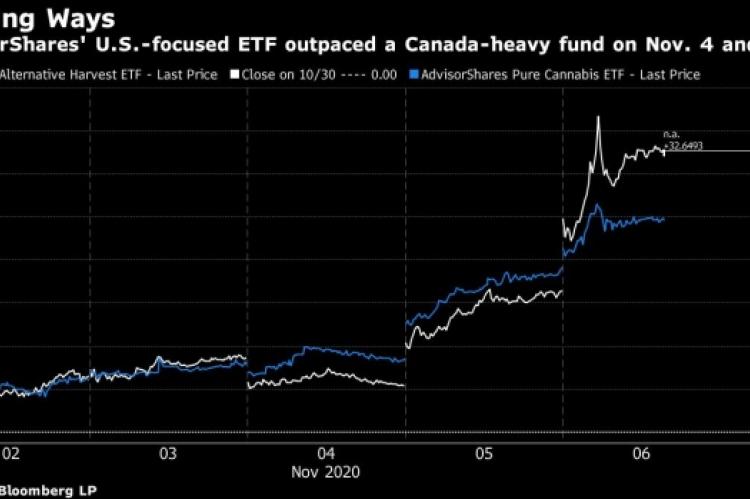 The U.S. election opened a small but noteworthy gap between Canadian and U.S. cannabis companies last week, underscoring all of the unanswered questions that investors face as access to pot spreads across the world’s largest economy.

New Jersey, Arizona, South Dakota and Montana voted to legalize recreational use last week, while Mississippi and South Dakota will allow medical marijuana. This puts about 21 million more Americans in the reach of cannabis products -- more than half Canada’s total population of 38 million.

While growth in a neighboring market might seem to be a good sign for Canada’s cannabis industry, the biggest Canadian producers plunged early on Nov. 4 in their first trading after the election. They rebounded later in the week -- in part on the prospect of legalization in New York state and changing sentiments. But the divergence, even if it was a blip, sparked discussions about how much Canada could benefit from the “green rush” south of the border.

Beyond the obvious questions surrounding marijuana’s legality -- it remains federally illegal in the U.S. -- there’s also the central issue of whether the U.S. would open its market up to competition.

Dan Ahrens, chief operating officer and a portfolio manager at AdvisorShares, added that the lack of certainty for now is an obstacle.

“There’s always been a great deal of misinformation about the differences between Canadian LPs and the U.S. multi-state operators,” Ahrens said in a phone interview, using the acronym to refer to licensed producers of cannabis. He added that, even if the Democrats were to come out on top in the elections, “it wasn’t magically going to allow a full legalization and give Canadian LPs access to the U.S.”

Given how fast the U.S. market is heading toward legalization, and how lackluster some of the Canadian companies’ financial results are compared to U.S. peers, Ahrens said a lot of the attention they’ve gotten doesn’t seem warranted.

Still, Canadian companies remain optimistic. They see healthy growth in other countries, from Europe to Australia and Latin America. And they’re finding creative ways to establish a foothold in the U.S.

Aphria Inc., based in Ontario, just bought a U.S. craft brewery, for example. The acquisition gives it some unique options that won’t violate cross-border issues, like CBD beverages.

And Chief Executive Officer Irwin Simon said the Canadian market is about to improve. The country will soon go to more than 3,000 stores, up from 800 where cannabis is currently sold.

“There’s still $2 billion worth of cannabis sold on the illicit market in Canada, and as more stores open, more consumers will come away from that,” Simon said in a phone interview.

QUOTE OF THE WEEK

“We believe this time next year, 80% of the U.S. population will have access to adult use. At that point, no matter who’s in the White House or controlling the Senate, they have to allow the industry to have normalized taxes and access to capital markets,” said Curealeaf Executive Chairman Boris Jordan in a phone interview after the election results.

NUMBER OF THE WEEK

WHAT YOU NEED TO KNOW