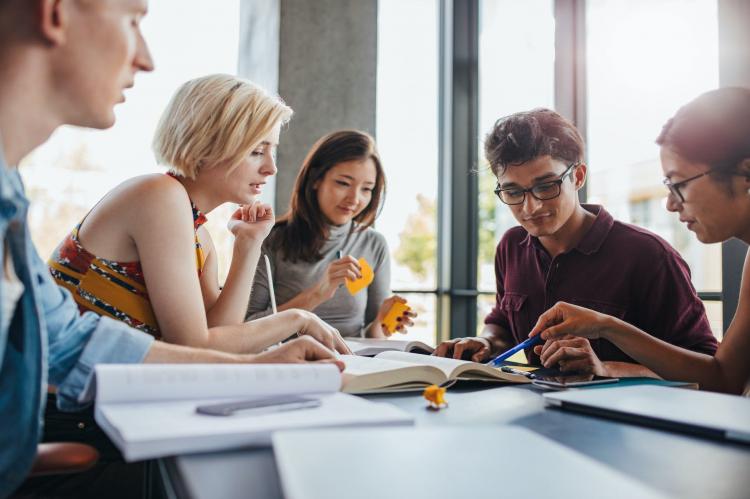 COVID-19 has wreaked havoc on the college experience. An August 2020 poll by College Reaction and Axios found that 22% of college students said they won’t be enrolling this fall semester. Many students citing a dissatisfaction with remote learning. Others are concerned about their health.

That gap semester has left as many as four million college-age adults looking for work. In looking for a Plan B, some students are turning to the cannabis industry.

One recent high school graduate, Chet Lim, decided to take a gap year and study cannabis online at Oaksterdam University, largely because of the situation with virtual learning.

“The cost of [traditional university] tuition—it’s being priced the same even though it’s mainly online now—so it just didn’t seem worth it,” Lim told Leafly.

Enrollment is up at Oaksterdam

There are a lot of Chet Lims out there. Natalie Darves, Oaksterdam’s dean of faculty, said they’ve never had as many students enrolled in Oaksterdam programs while simultaneously working on another traditional degree.

Cannabis job applications are up, too. Recruiters like James Yagielo, CEO of Hempstaff in Miami, FL, says that since June his company has seen more applications from young adults in the middle of their degrees.

Why cannabis? In 2020, it’s one of the rare industries that’s alive and thriving. Jobs exist and companies are hiring.

Cannabis is one of the only industries that has reported a sales boom during the COVID-driven economic downturn. Hempstaff’s James Yagielo credits the industry’s sustained success in unpredictable times for the uptick in college-aged applicants his company has seen.

“Cannabis is rated the fastest growing industry out there,” said Yagielo. “While the CEOs are no longer making ridiculous figures they were making before, we’re still seeing a lot of jobs coming in and promotions happening because the cannabis industry was deemed essential.”

Cannabis’ essentiality is a major reason Samuel Moats-Messing, a college student and budtender at JAYNE Recreation and Medical Dispensary in Portland, OR, has remained in the industry and become the envy of his jobless friends.

“I am very grateful that I have a good job in the cannabis industry right now,“ Moats-Messing told Leafly. “So many of my friends that work in the restaurant and bar industry are unemployed and struggling right now. I consider myself lucky.”

Job qualifications: Be 21 or older

Though you don’t have to be 21 to study cannabis, you do have to be at least that old to hold a job in the industry. Most college students taking a gap semester are finding entry-level and temp work, either by applying directly or going through a recruiting agency like Hempstaff, Vangst, Viridian Staffing, THC Staffing Group, HerbForce, Lifted Talent, and others.

“The most obvious [entry-level position is] a budtender or dispensary worker,” said Yagielo. “We actually do training for that for people who don’t know much about cannabis or even do. We teach them everything they need to know to be a dispensary agent and properly give out medical marijuana to the patient [to treat] their ailment. We’ve seen a lot more college kids come into that in the last year, which was interesting.”

Work on a cannabis farm, or an indoor grow facility

Besides dispensary agents, there’s also entry-level work on the cultivation level. These jobs include people who trim, water plants, and test the soil at cannabis and hemp farms. The hemp industry actually provides more temporary jobs, too, which can be a good fit for students taking a semester off.

“If people are taking say a quarter off in the fall, there will be a lot of harvesting, six-week temporary work jobs available [in hemp],” said Yagielo.

Also, if the student has any previous sales experience, sales jobs—like selling edibles or tinctures to a dispensary—may also be open to a college student.

Along with the wealth of jobs, Moats-Messing says the ease of entry and the flexibility inherent in cannabis industry are qualities that many students desire—especially now, as they figure out their new virtual learning routine or time off of school altogether.

“My schooling has been impacted [by COVID-19], said Moats-Messing. “It has moved to virtual-only. That convinced me to take fewer courses this coming term. “I haven’t upped my hours at the dispensary, but I have adjusted my schedule…to be more conducive to my online courses. My dispensary is very good with schedule flexibility, which is one of the reasons I appreciate the job.”

Tabitha Quattlebaum, a college student, single mom and one of Moats-Messing’s fellow budtenders at JAYNE, also says balancing school, work, and parenting has been easier for her because of the flexibility available with cannabis work.

“In my experience, [job flexibility] has been typical,” she said. “Even at the dispensary I used to work at, there were two other students there with schedules that were worked around.” Change and adaptation are part of the cannabis industry’s DNA. “With all the state regulations that are constantly changing,” she said, companies have been built with “this necessity to go with the flow.”

The cannabis industry has relatively low barriers to entry. That’s an important consideration for young adults without degrees and little work experience. To become a trimmer or budtender in most legal states, all you need is to be 21 years old.

That said, entry looks different in every state and depends on the role. Applicants should always research the rules and regulations of the state in which they live. Oregon and Colorado, for example, require anyone working in a plant-touching company to possess a Marijuana Worker’s Permit. The time and effort to acquire those permits is roughly equivalent to getting a food handler’s permit, said Quattlebaum.

What about federal student aid?

If a student receives scholarships or federal student aid and plans to continue to receive those loans for schooling, there’s always a concern that any connection to marijuana—which remains illegal under federal law—could put that money in jeopardy.

This is a legitimate concern, given the rhetoric around drugs and student aid. But in 2020 a job in the legal cannabis industry is highly unlikely to affect a student’s aid status.

Most budtending college students don’t have any issues keeping their financial aid while working in the industry.

Student federal aid is penalized only when a student is convicted of a drug offense, including marijuana possession or sale. In more than six years of legal adult-use cannabis sales in Colorado, Washington, and other states, no cannabis worker at a legal state-licensed company has ever been arrested for properly doing their job.

If you step outside the legal lines and possess or sell cannabis in a non-legal state or in a non-legal way, and are arrested and convicted, you may lose your eligibility to receive federal student financial aid for one year (for possession) or two years (for selling).

Plenty of cannabis jobs are out there. But landing one as a college student may not be as simple as it seems.

Danielle Schumaker of THC Staffing Group in Chicago says the availability of cannabis jobs will depend on the state you want to work in—and how new their cannabis program is. That’s because the state’s regulations and market situation affect the hiring abilities of local companies.

In Colorado, Schumaker said, “you literally can go get a job in the industry right now.” In a state with a new or emerging market, like Illinois or Massachusetts, “it’s really hard to know what someone’s real chances of getting a job is.”

In Illinois, for instance, a college student seeking a job in cannabis growing needs to be aware of the state’s cannabis production situation. “In the entire state of Illinois, there are sixteen companies that own all the cultivation,” said Schumaker. “So, while you and I might hear the news [about booming cannabis sales in Illinois] and think, ‘Oh yeah, they got to be hiring in cultivation, they got to be expanding,’” in reality there are a limited number of companies that might be hiring.

Three rules to heed when job-seeking

If you’re serious about landing a cannabis job, a few words of advice: