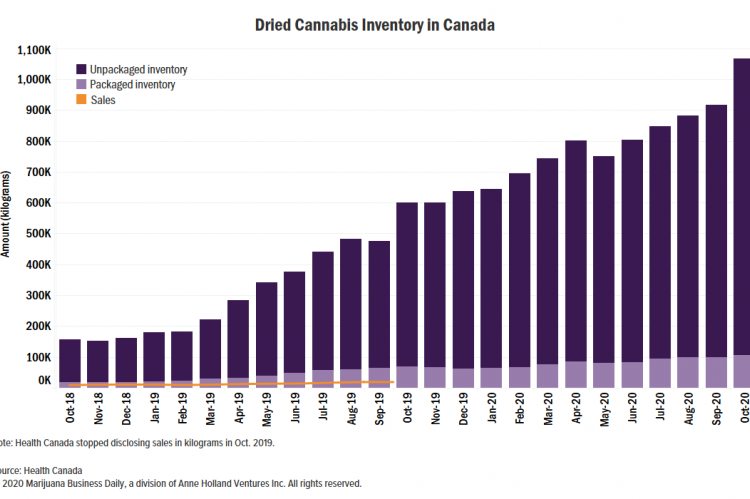 Canadian licensed producers added a record 220,461 kilograms of marijuana to their inventories in October 2020, according to new data offering a statistical glimpse of the country’s first large-scale “croptober” – when most of the fall outdoor harvest comes in.

The 220,461 kilograms (221 metric tons) of new cannabis is about 50% more than the previous monthly record, in October 2019, likely owing to the first outdoor yields.

The inventory overhang also could put added downward pressure on cannabis prices, which have been falling steadily since legalization in late 2018.

Among specific products, the Health Canada data shows a sharply rising surplus of cannabis edibles and a smaller imbalance for extracts.

But the vast majority of that inventory, about 95%, remains with cultivators and processors, according to the Health Canada data.

By contrast, wholesalers and retailers have been able to better manage inventory levels to meet actual consumer demand.

That might mean further write-downs are ahead for any large-scale producers whose warehouses remain full of dried cannabis.

Three of the largest greenhouse producers, Aurora Cannabis, Canopy Growth and Tilray, already shuttered large facilities in 2020 and wrote down billions of dollars of cannabis.

However, while Canada’s largest producers have closed large greenhouses, which cost them up to 250 million Canadian dollars ($196 million) apiece to build, outdoor production has more than made up the difference.

On the other hand, indoor growing area, including greenhouses, grew just 50% to 2.04 million square meters over the same period of time.

The Health Canada data shows that indoor cultivation area likely peaked in mid-2020, before falling in the ensuing months on average.

“They’re destroying a lot of their cannabis or paying a lot of extra fees to store it until they know what to do with it,” she said.

“A market like Canada just doesn’t necessitate that many licensed producers at such a large scale, and especially outside, when lower-THC products are not flying off the shelves like the higher-THC ones.”

Packaged production of edibles, including beverages, was a record 4.1 million units in October 2020, blowing past the previous record of 2.9 million units established two months earlier.

That represents new inventory growth of 50%.

By comparison, sales increased 13% in October over the previous month.

The supply/demand imbalance in the extracts category is less dire.

Overall inventory of extracts with federal license holders, wholesalers and retailers actually eased in October 2020 to 9.8 million units from 9.9 million units in September.

That was about six times more than sales.