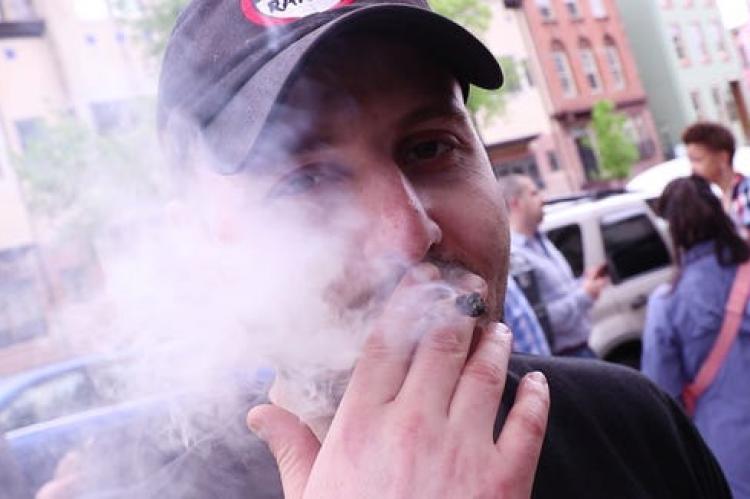 If all goes according to proponents' plan, New Jersey may finally be the cheapest at something: legal weed taxes.

A marijuana-legalizing ballot measure expected to go before voters next year states that legal weed sales in New Jersey would only be subject to the state sales tax, which is currently at 6.625%.

Municipalities allowing legal weed dispensaries would also be able to levy their own "transfer tax" up to 2%. Yet the combined total possible tax of 8.625% would easily be the lowest in the United States.

It's unclear how long New Jersey would be able to maintain its bargain-rate weed tax.

If the voters back recreational weed for adults in a likely November 2020 vote, future legislation would iron out additional details — and that could include additional excise taxes, said Scott Rudder, president of the New Jersey Cannabusiness Association.

"Ballot questions can and should be broadly written because it's important to be flexible," Rudder said. "You want to have some ability to make corrective action."

Those new laws won't be solidified until and after the ballot measure passes, Rudder said.  The legal weed landscape will likely have changed by then.

"We'll have seen other states (legalize marijuana) by then, and there's a desire in the Northeast to have a common tax rate (among states that have legalized weed)," Rudder said.

If New Jersey declined to levy an additional tax on marijuana, it would be the only state to do so. All 11 of the states with legal weed institute some kind of excise tax on marijuana, about 26 percent on average when including both excise and sales taxes.

Of the nine states with percentage-based legal weed taxes on the books, the average rate is 26 percent, including taxes specifically placed on marijuana and general sales taxes.

Washington marijuana customers pay 43% in state taxes, the highest in the United States. Michigan customers pay 16%, the lowest of the states where weed is legal.

In Alaska and Maine, sales tax is levied at a flat rate per ounce. Colorado and California levy additional wholesale, flat-rate taxes when marijuana is grown and sold. Those taxes are also passed onto consumers.

Most states also allow towns to pass their own marijuana taxes, in addition to any general sales taxes they already levy.

By the time the first ounce of New Jersey legal weed is sold, the state will likely have levied some kind of excise tax, said Erik Altieri, executive director of the National Organization for the Reform of Marijuana Laws.

"What we see now is going to continue to evolve after it's approved. We fully expect they'll tinker with the taxes," he said.

During the two years legal weed has been debated in the Legislature, proposed marijuana taxes have gone through many forms. A bill first introduced by Sen. Nicholas Scutari, D-Union, called for an escalating marijuana tax that would start at 7% and rise to 25% over a few years. Gov. Phil Murphy's administration planned for a 25% tax in previous budgets.

The final version of a proposed marijuana legalization bill — which came a few votes short of passage in March — called for a flat tax rate of $42 per ounce, which would allow the state to count on a steady revenue stream even if the price of cannabis fell.

At current estimated values, $42 per ounce equates to a 12% tax rate.

In an interview, Scutari said removing any additional New Jersey legal weed taxes from the ballot question is a way to combat the black market. The cheaper the weed, the more likely people are to buy it from a licensed marijuana dispensary than an illegal pot dealer.

"One of the things we can try to do to combat and eviscerate the black market is to have the lowest possible tax rate," Scutari said in an interview. "It'll take a long time to get rid of the black market, but this will help get it done."

But the relationship between legal weed and the black market isn't black and white.

The survival or decimation erosion of the black market is a common calling card of both marijuana legalization advocates and opponents. Legal weed activists claim that legalizing marijuana would send customers away from illegal pot dealers and into dispensaries.

Opponents cite arrest statistics in existing legal weed states, where many are still arrested for selling weed without a license or having more than the legal limit in their possession.

But a number of illegal pot dealers told the USA TODAY NETWORK New Jersey earlier this year that they wouldn't close up shop due to legal weed. Instead, they expected their business to grow as new customers, dissatisfied by the price and options at dispensaries, turned to them.

"They think they're going to write some law to get rid of us, but even if you arrested me today, there's another 100,000 of us out there still selling weed," said Ed Forchion, the longtime marijuana legalization activist known as "NJ Weedman." "They're not going to stop the black market unless they include guys like me."

Forchion, who said he's been arrested three times in the last few months, began openly selling weed — including in front of the Statehouse during marijuana negotiations — earlier this year. And he intends to keep publicizing his business, despite past or future arrests.

Scutari and Senate President Stephen Sweeney, D-Gloucester, on Monday announced that they were officially ending any attempt to legalize weed in New Jersey through the legislative process. Instead, they introduced a ballot resolution that's expected to go to New Jersey voters on Election Day 2020.

In order for the measure to appear on the ballot, it must first be approved by the Senate and Assembly, which the senators said they expect to occur this year.

If 60% of both houses approve the measure, it will go on the ballot automatically. If it's approved by a lesser margin this year, they'll have to vote on it again before August in order for it to appear on the ballot.