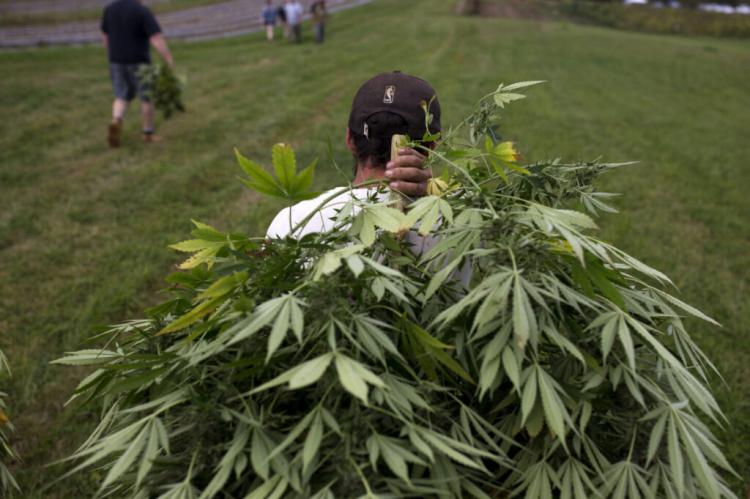 The state wants to change the way it differentiates hemp from marijuana to echo stricter federal guidelines.

Farmers are speaking out against Maine’s plan to adopt stricter, more costly hemp farming rules, urging state agriculture officials to lower licensing costs and not change how they measure the small amount of psychoactive element found in this cannabis crop.

Maine wants to change how it defines hemp, and how it differentiates it from marijuana, to echo stricter federal guidelines on how much THC is allowed by using a federal formula that reduces the small amount of psychoactive element that has been allowed in Maine hemp since 2014.

Using the proposed potency formula, about 27 percent of farmers who grew hemp in Maine last summer would have had too much total THC, something the industry calls “testing hot.” While state officials tried to reassure farmers, new federal rules would require hot hemp to be destroyed.

Many of the farmers who testified Tuesday spoke out against the stricter THC formula, and asked if state officials would delay implementation for a year or consider allowing farmers to remove excess THC from a hot crop so the product that remains meets state and federal standards.

Whitefield hemp farmer Ben Marcus called the THC threshold a political number that had nothing to do with any scientific data about the cannabis plant’s effect on a consumer. He complied with all the state’s rules when growing his 2019 crop, but the same seed if planted this year would likely test hot.

“I’d like to keep access to the same genetics as I did last year because they did great,” Marcus said.

The uncertainty is making it hard on Maine farmers to buy seeds. Many would like to stay with the same strains they already know how to grow with relative assurance they would test under the THC threshold but still contain high amounts of CBD, which makes them valuable in the wellness market.

Waiting too long to settle the THC level could put Maine farmers at a disadvantage if they have to switch to new strains that test below the federal levels. Such seeds will be in high demand, raising the operating costs and shrinking profit margins, if farmers can even find a way to buy them at all, they said.

Some farmers urged Maine to adopt rules similar to ones recently approved by Vermont, which gives the hemp farmer flexibility to use crops that come in slightly over the allowable THC limit, but not sell them into the CBD market for human consumption. Instead, they could be used as animal bedding or biomass.

The state’s hemp program manager, Gary Fish, told the audience of more than 50 hemp farmers Tuesday that the department would do all it could to work with them. The proposed rule “is not set in stone,” Fish said. The department will be as flexible as possible within state and federal law, he said.

The new state rule also would double the per acre fee to raise hemp from $50 to $100. State officials said that would pay for a new program manager and a full-time seasonal inspector and give Maine the flexibility to do things like oversee farmers extracting THC from hot crops to make it legal hemp again.

“The fees for small farmers are going to more than double,” hemp farmer Erica Haywood said.

She compared the permitting costs for growing 49 acres of hemp in North Carolina, about $504, to what it would cost her to grow the same crop in Maine, about $6,440. With a pound of hemp flower selling for about $275 currently, Haywood estimates 25 percent of her gross revenues would be spent on licensing.

Many other farmers agreed, saying they wanted the state to have the funds to grow the program but that margins were too tight, with too much uncertainty in the market, to handle the proposed fee increase in the state hemp plan.

“I’m a small farmer,” said Colleen Maguire of Silver Highlands Farm in Plymouth. “I did 5 acres this past year. My intent was to do 18 acres this year. … But if this licensing goes into effect, I will not be able to do it. I will simply not be able to afford it.”

The Department of Agriculture, Conservation and Forestry will consider public comments, including any submitted in writing before Jan. 20, before sending its hemp rule to Commissioner Amanda Beal and the Maine Attorney General’s Office for consideration before becoming law.

The final state rules will be in effect for the 2020 hemp growing season. Maine has decided to stick with its own hemp program in 2020, applying whatever new rules it adopts, and then apply this summer for federal approval for its state program for 2021 and beyond, Fish said.

Farmers worry the proposed change could undercut the state’s hemp industry just as it starts to take off. Three years ago, Maine was growing less than a quarter acre of hemp. As demand for CBD products took off, however, the program expanded rapidly. The state licensed 2,700 acres of production in 2019.