Kamala Harris Evolved Slowly on Legalization, but She’s All About It Now 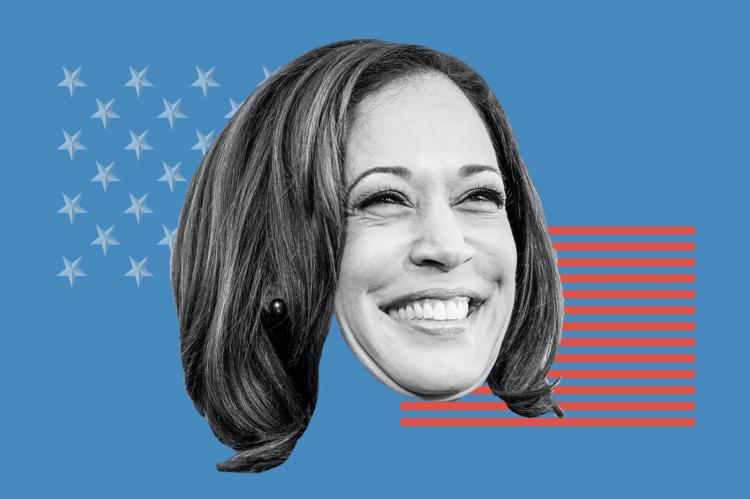 One thing we know for sure about Kamala Harris is that cannabis makes her laugh.

Not necessarily when she smokes it, as the California senator and top-tier candidate for the Democratic presidential nomination says she hasn’t gotten high since college. But definitely when she’s asked about it. And her laughter has evolved from nervous to knowing right along with her position on legalization, which has gone from clear opposition in 2010 to full-throated support today.

For example, back in 2014, when Harris was running for re-election as California’s attorney general, a local television reporter caught her off guard at a campaign event.

Reporter: Your Republican opponent says that he is favor of the legalization of marijuana recreationally. Your thoughts on that…

At the time, Harris’s official stance was that she was “not opposed” to legalization, though she didn’t support it either, as she explained to Buzzfeed:

I don’t have any moral opposition to it or anything like that… [But] I’m the top cop, and so I have to look at it from a law enforcement perspective and a public safety perspective. I think we are fortunate to have Colorado and Washington be in front of us on this and figuring out the details of what it looks like when it’s legalized.

Over the next five years, however—as she rose up the ranks in California politics, and support for legalization spiked nationwide—Harris took a series of carefully calibrated, incremental steps toward a more progressive policy position.

But she didn’t clearly come out in favor of full federal legalization until 2018.

And then in February of this year, she did a guest spot on a popular syndicated radio show called The Breakfast Club, where the laughs flowed freely as she fondly recalled getting blazed as a student at Howard University.

Breakfast Club: Have you ever smoked [cannabis]?

Harris: I have… and I did inhale.. [laughs heartily]… It was a long time ago.

Was it in college?

So if it was legalized all throughout the country, would you…

Listen, I think that it gives a lot of people joy, and we need more joy in this world [laughs even more heartily].

In the last presidential election, neither Donald Trump nor Hillary Clinton admitted to ever consuming cannabis, and neither supported federal legalization. The three presidents before that admitted to past use, but framed it as something between a youthful mistake and a moral failing.

All of these politicians were clearly afraid of being labeled soft on drugs, a specter that once loomed over the head of anyone who even broached the subject of ending cannabis prohibition. But oh how the times have changed—as evidenced by the fact that Harris’s endorsement of cannabis as a bringer of joy to the people barely raised eyebrows.

Listening to What Now?

Tellingly, it was an apparent gaffe regarding what albums she was bumping while puffing on those collegiate joints that raised eyebrows.

To some listeners, Harris appeared to claim she listened to Snoop Dog and Tupac while getting high in college, even though neither of them released their first album until after she’d earned a masters degree. Naturally, right-wing media outlets jumped all over this supposed discrepancy (to highlight the candidate’s “authenticity problem”), while the New York Times and Washington Post both posted articles suggesting that Harris was actually answering an earlier question about what music she listens to in general.

Lost in the crossfire was the obvious point that this was perhaps the most pointless controversy of all time. I mean, could there be anything more authentic for a cannabis consumer of a certain age than not remembering exactly when Snoop’s first album dropped?

Harris also caught some friendly fire after the Breakfast Club interview from fellow senator and Democratic presidential candidate Cory Booker. The New Jersey senator—who says he’s never tried cannabis—has been one of the leading voices in the US Senate in favor of legalization, and he took issue with treating a policy rooted in racial and economic injustice as a laughing matter:

“We have presidential candidates and congresspeople and senators who now talk about their marijuana use almost as if it’s funny. But meanwhile, in 2017, we had more arrests for marijuana possession in this country than all the violent crime arrests combined.”

Booker didn’t specifically single out Harris, but his jab was clearly sent in her direction. And there was history behind it.

Booker took early risks on legalization, introducing his national legalization proposal, the Marijuana Justice Act, in 2017 and enduring many lonely months as its sole sponsor while no other senators would touch a bill that would remove cannabis from the federal government’s list of controlled substances, penalize states where laws against cannabis are disproportionately used to target people of color, automatically expunge federal cannabis use and possession crimes, and create a fund to reinvest in communities most impacted by the failed War on Drugs.

Meanwhile, Harris became California’s junior senator in early 2017 and said almost nothing on the issue during her first two years in office—a crucial period when her own state was implementing its adult-use cannabis system, and US Attorney General Jeff Sessions was making serious threats about shutting the whole thing down.

Booker’s critique also raises an underlying question about her candidacy.

Where does Harris really come down on cannabis policy and larger issues related to criminal justice reform? Is she a “progressive prosecutor,” as her campaign claims, who worked to reform the system from within? Or is she a longtime law enforcement official who only signed on to legalization after support among Democrats topped 75%?

Ironically, Kamala Harris’s first clear endorsement of full federal legalization came in 2018 when she added her name as a co-sponsor of Booker’s Marijuana Justice Act.

Here’s how Harris explained her decision to sign on.

“Right now in this country people are being arrested, being prosecuted, and end up spending time in jail or prison all because of their use of a drug that otherwise should be considered legal. Making marijuana legal at the federal level is the smart thing to do, it’s the right thing to do. I know this as a former prosecutor and I know it as a senator.”

Ever since, she has made cannabis legalization a prominent part of her campaign, particularly on social media.

Harris also pressed US Attorney General William Barr, during his confirmation hearing, to affirm that he does not intend to use the Department of Justice’s limited resources to enforce federal marijuana laws in states that have legalized.

And most recently she just teamed up with Representative Alexandria Ocasio-Cortez to introduce the Fair Chance at Housing Act, which would protect people with low-level drug convictions from losing access to public housing.

All of which makes clear that despite her opposition in the past, and ongoing penchant for getting the giggles when discussing the subject, Kamala Harris now fully supports full federal legalization. Clearly, she saw it as a winning issue when she remained in the running for the Democratic presidential nomination.

So the question facing the cannabis community becomes how much faith to put in a former “top cop” who didn’t change her tune until the state she represents had already fully enacted legalization, and even a majority of Republicans started supporting ending cannabis prohibition nationwide?

Would she continue to push the issue after winning the nomination? How about after taking up residence in the White House? And what about aggressively tackling closely related criminal justice reforms like mass incarceration and abusive policing?

With Harris now on the Democratic ticket as Joe Biden’s vice presidential nominee, the debate over her sincerity on legalization will surely heat up. Some see her as a pragmatic reformer. Others charge her with  serving the interests of law enforcement first, and civilians second.

A recent Vox explainer laid out evidence on both sides:

A close examination of Harris’s record shows it’s filled with contradictions. She pushed for programs that helped people find jobs instead of putting them in prison, but also fought to keep people in prison even after they were proved innocent. She refused to pursue the death penalty against a man who killed a police officer, but also defended California’s death penalty system in court. She implemented training programs to address police officers’ racial biases, but also resisted calls to get her office to investigate certain police shootings.

All of which means that while Kamala Harris certainly has a better record on cannabis and the drug war than her Democratic running mate Joe Biden, that’s also a pretty low bar, given that Biden remains one of the most notorious drug warriors of all time. The real test is how strong her support of legalization and criminal justice reform remains as the campaign rolls on and she takes on a role that’s traditionally all about protecting and defending the party’s presidential nominee.

For the cannabis community, this is no laughing matter.